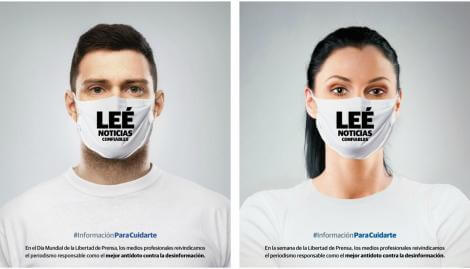 World day of freedom of the press It is this Sunday. But it will be remembered for the next few days, which is why the week of press freedom opens.

The Association of Argentine Journalistic Entities (ADEPA) will highlight the work of the professional and responsible journalism, as the best antidote to disinformation.

In this way it joins the combat of fake news, especially in times of coronavirus. Claiming good journalism and the key factor it has against disinformation.

It is to base it to fight it always. Especially in times of pandemic, in which false versions of the virus circulate. Why is key read reliable media, with verified information.

May 3 was declared as World Press Freedom Day in 1993 by the General Assembly of the United Nations. The agency followed the Recommendation adopted during the 26th session of the UNESCO General Conference in 1991.

Every year the fundamental principles of press freedom are celebrated worldwide. How to defend the media from attacks on your independence, as well as pay tribute to the journalists who died in the exercise of their profession.