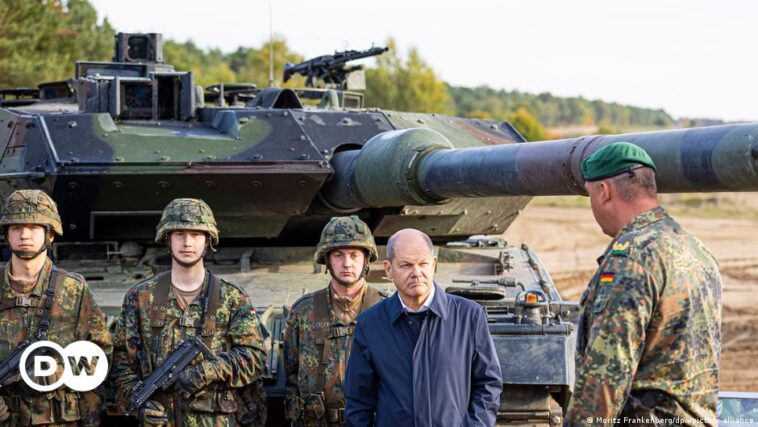 German Chancellor Olaf Scholz will not be swayed. When it comes to supplying heavy battle tanks to Ukraine, he likes to point to the three principles the German government has been adhering to: First, Ukraine must receive as much support as possible; second, a direct conflict between NATO and Russia must be prevented; third, unilateral action by any one supporting nation should be avoided.

On the weekend, he once again repeated his mantra: Decisions should be made only “in close consultation and coordination with our friends and allies.”

“We will not allow ourselves to make any excited, rash statements. We do not see the need to say something every 10 minutes just so we can rattle on about such serious matters as war and peace, or the security of our country and of Europe ,” he said.

No deal on tanks, but hope remains

Speculation about the reasons for Germany’s perceived hesitancy when it comes to delivering Leopard 2 tanks coincided with the presentation of a foreign policy paper by Scholz’s center-left Social Democrats (SPD) on Monday, which calls for Germany to take a stronger lead in the world . “A turning of times (turning point) for our foreign policy — Social Democratic answers to a world in upheaval,” is the title of the 23-page paper presented by SPD co-chair Lars Klingbeil in Berlin.

In reference to Scholz’s now-famous turning point speech condemning Russia’s invasion of Ukraine last February, Klingbeil said the party needed to answer fundamental questions: “What does this historic shift mean from a Social Democratic perspective? How do we define our relationship with Russia, China, and the United States? How does a self-confident and sovereign Europe define itself, and what is Germany’s role in this rapidly changing world?”

Last summer, the Klingbeil joined those calling on Germany to play a stronger role in global leadership. He said Germany had high expectations to live up to, and added that the country’s responsibilities had been growing steadily. “In this paper, we state clearly that it is time to relinquish that bit of restraint that has, to a certain extent, existed for decades, and prevented us from taking a stronger lead,” Klingbeil told a press conference on Monday.

This, the SPD co-chair insisted, had nothing to do with the current question of weapon deliveries.

Supplying weapons to war zones is still a new and sensitive topic for Germany. Last Sunday, on one of Germany’s most popular political talk shows, peace and conflict expert Nicole Deitelhoff pointed out that for decades, there had been a “particular German understanding” that Germany would exercise restraint. “It will take a very long time,” she said, for Germany to translate leadership “into operational policy, and into strategic planning.”

“I think we can do more,” said Sönke Neitzel, a military historian and professor of military history. “We could coordinate more in the background. We’re bigger than the Netherlands or than Denmark, and we have a responsibility.”

Standing in the shadow of the United States

Scholz is currently also being accused of hiding behind the United States when it comes to supporting Ukraine. Speaking on the talk show, Klingbeil responded to this criticism by pointing to Germany’s limited options. “After all, we are far from being in a situation where we could do without America. I think that would be an illusion,” he said.

Chancellor Scholz’s cautious course enjoys broad support within his party, Klingbeil emphasized. There is “full backing” for close international coordination on the issue, and for ensuring “that we ourselves do not become a party to the war,” he said when presenting the SPD’s policy paper in Berlin.

“Leadership does not mean overpowering others,” he said. “To us, it means adopting a cooperative leadership style.”

Scholz is also playing at his own party. The Federal Chancellery and SPD cooperate closely, and Scholz keeps the SPD leaders Klingbeil and Saskia Esken closely tied in to the decisions he makes.

The SPD parliamentary group in the German Bundestag, led by Rolf Mützenich, is a powerful fact. Mützenich and Esken are considered part of the left wing of the party, unlike Klingbeil and Scholz who are said to be undogmatic, realistic and pragmatic.

A look at the German-made Leopard 2 tank

Turning away from Russia

Historically, the left wing of the SPD has represented a significant voter’s base with pacifist leanings. Before February 24, 2022, maintaining good relations with Russia was a matter of course they considered necessary in order to maintain peace in Europe.

“Change through rapprochement” was the SPD’s guiding principle, and it was assumed that Russia could be integrated and even influenced through good relations. That was a mistake, and Klingbeil was one of the first Social Democrats to admit this after Russia’s invasion.

The advocates of an anti-militarist line geared toward peace initiatives remain prevalent in the SPD. After the last parliamentary elections, many young party members joined the SPD parliamentary group backing Mützenich.

Scholz knows that, and so does Klingbeil. He wants to chart a new course, but he knows this will take time. Much works lies ahead in gaining support, which is why the newly proposed strategy for foreign and security policy will not be voted on until the end of the year.

Scholz is a party veteran and knows his party well. He has been in politics for decades and has witnessed many conflicts among the party’s various facts. Many SPD leaders before him have fallen because they were seen as too removed from the left-leaning party base, and failed to successfully manage cantankerous members.

Scholz was never one of the more popular figures in the party, and has historically fared poorly in elections for party posts. His successful campaigns in Hamburg and the Bundestag elections have earned him respect. But that does not mean he can represent and implement a political line that goes against the grain of the party.

The chancellor also believes his policy is in line with the will of the German population: “The majority of citizens support the prudent, well-considered, and carefully prepared decisions of the federal government,” he said.

However, the research institute infratest dimap has found voters to be split on the matter. It conducted a survey last week to find out what voters think of arms deliveries to Ukraine. Asked about whether heavy battle tanks should be sent to Ukraine, 46% are currently in favor, and 43% are against it.

When this cohort was split by party preference, it was found that among the supporters for the main opposition party, the centre-right Christian Democratic Union (CDU), 66% were in favor and 29% were against delivering weapons.

Within Scholz’s governing three-way coalition, the representation wasn’t as clear: The formerly pacifist environmentalist Green Party sees 61% of its supporters backing tank deliveries. Among SPD supporters, 49% said they were in favor of, and 40% were against battle tank deliveries. The neoliberal Free Democrats voter base is split.

Perhaps, then, Chancellor Scholz has his divided voter base in mind more than anything.

This article was originally written in German.

While you’re here: Every Tuesday, DW editors round up what’s happening in German politics and society. You can sign up here for the weekly email newsletter Berlin Briefing. 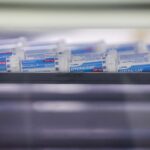