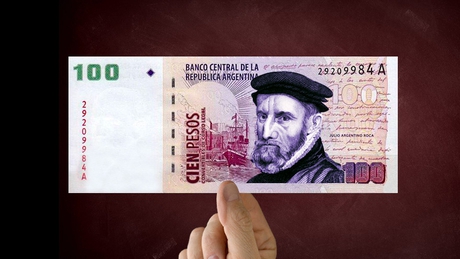 There is a rare consensus that the risk of an inflationary outbreak is still far away. However, the threat of Thomas Gresham always lurks

Few people should have better described the idiosyncrasy of Argentines as Thomas Gresham; and it has the merit of having done it more than two centuries before there was a country called Argentina.

This 16th century English merchant was an adviser to Queen Elizabeth and realized that since the use of metals to make coins had been altered, those with the highest proportion of gold were jealously guarded in chests while those with the most Silver were seen circulating in the markets.

Thus, this Gresham observed a phenomenon that would become established as one of the basic laws on money: when two currencies coexist in a country, one good and one bad, people tend to use the worst quality to make payments, while retains the best reputation as a way to preserve your capital. Consequently, the good currency is not seen to circulate much, while the bad one changes hands at full speed, because nobody wants to keep it.

It is a simple principle and anyone understands it intuitively. For now, millions of Argentines have been enthusiastically applying this principle for decades. And it is not by chance that there are more than a million chests intended to protect Dollarseven if they don’t perform interest any.

Although not all officials have shown to be clear.

These days, with the nervous market, the government’s economic team is looking for a way for people not to flee to the dollar, and that’s why it takes measures that make it difficult operating in the parallel market. It was also hinted at a future banking system reform, destined to capture Argentine savings to deepen credit in pesos.

But the background does not allow us to predict much success in this task.

From the legendary recommendations of “he who bets on the dollar loses” to the cultural defeat of Kirchnerism, who attempted a battle to eradicate dollarization, there is a long list of people who demonstrated that they did not understand Gresham.

During Kirchnerism, for example, it was argued that it was better to invest in pesos because they left more money than a dollar at an almost fixed price, but that reissue of the bicycle of the 70s did not convince even Cristina Kirchner’s own ministers. Then an attempt was made to impose the already forgotten Cedin, a title invented by Guillermo Moreno to work as a “Creole dollar”, but its volume was never less than negligible.

There was no case: the Argentines always fully understood that in the country there was a currency with which to make purchases and another for savings. And that is what explains the reviled “capital flight”, which is nothing other than national savings, estimated today at about US $ 350,000 million, which unsuccessfully attempts to attract the banking system.

In full social isolation, the validity of the Gresham law has become the main risk for the Argentine economy. While the “little machine” to issue pesos works at full speed and increases nervousness about a possible default on the debt, the parallel dollar came out of its lethargy, with the three modalities –blue, stock market dollar and “has liqui” – well installed above $ 100.

However, what is striking about the moment is that there is a strange calm, a consensus in the sense that not a single dollarization massive not a hyperinflation they are an imminent scenario.

In fact, inflation in April, according to forecasts by private consultants, could be around 2%, a triumph compared to the 3.3% registered in March.

And as for the dollar, the argument that is often heard among City experts is that the quarantine curdled the usual currency deficit caused by the departure of tourists. The former vice minister Emmanuel Álvarez Agis estimated that figure at $ s4,000 million. On the other hand, the consensus is that imports could fall more than exports, so, despite the expected deep recession – there is already talk of an 8% drop in GDP – the Central Bank could strengthen reserves .

Forecasts from bank surveys indicate that this year inflation would end at 43%, with an official dollar of $ 85. In other words, a devaluation of 27 points, but since it is located below inflation, it would mean a revaluation of the peso in real terms.

Does this mean that, finally, the old Gresham was wrong, and that in the midst of a historical crisis the Argentines decided to cling to the national currency that they had always repudiated?

Weights in slow motion, how long?

At first glance, this relative calm may seem strange when the central bank is broadcasting as few times in its history. In the month that has passed since the quarantine is in effect, treasure $ 290,000 million for transitory advances and transfer of profits. The destiny of all that money is the financing of the plans of assistance to companies and workers in the emergency, a package whose cost the Government itself has already estimated at 3% of GDP.

But the forecasts suggest that this is just the beginning. For example, PPI economist Marcelo Romano predicted that in the April-June quarter there will be a net expansion of at least $ 300 billion per month. That would give a base increase of 61% between March and June, at a rate of 17.5% per month.

And there are economists who believe that in the year the base will double, at least.

How do you explain why this level of emission has not had a more drastic consequence? This is where the other fundamental concept emerged from that observation of 450 years ago: when the speed at which money circulates, then the public demand increases for keeping those bills and coins, even if they are among the “bad” ones.

This decrease in speed can occur for several reasons: it now occurs due to quarantine. There are people who saw their income drastically cut, and those who are charging do not have much to spend. On the other hand, Bank transactions More basic became complicated.

And many people who previously had a predisposition to immediately shed the weights now decided to take a cautious stance and save them, anticipating that worse times may ensue.

And also … there is the stocks. Which limits – although it does not eliminate, as has been seen – the possibilities that whoever has pesos and distrusts them can run towards the dollar.

However, awareness is beginning to emerge that this “free way” to issue money without risk cannot last long.

One of those who showed signs of being clear about the danger is the minister himself Martín Guzmán. In an interview, he acknowledged that if the issue is not carried over to prices, it is because people cannot leave their homes.

“After the pandemic, obviously we will put in place a plan to control the effects of that cumulative emission“he promises. And he is confident that some of the money will naturally be offset by an increase in the supply of goods as the economy picks up and people start consuming.

The minister hinted that, combining control of the dollar, increased consumption and a resorption of prices that remain, there should be no fear of a catastrophic scenario of runaway inflation.

It is, after all, what is being said in several countries that have always been considered as models of monetary discipline. So much so that a recent editorial from the Financial Times, one of the bibles of neoliberalism, states that the issue of money is a valid measure at times like this.

“The magnitude of the current crisis means that even the most direct monetary financing, such as delivering cash to people, should remain an option. The debate should not focus on whether there can be monetary financing, but on keeping the process under control. through independent central banks, “says the FT.

And by way of example, he points out that Andrew Bailey, the president of the Bank of England, hastened to clarify that its monetary expansion should not be confused with a desire to finance a fiscal deficit by way of emission. “That comment was perhaps largely understood as a way to convince international investors that there is little reason to be afraid of holding funds in British pounds,” the editorial added.

It is something that Argentine officials often wanted to do, with little success. He tried, for example, Axel Kicillof, who in his time as secretary of economic policy said in Congress that the argument that inflation is inflationary was ridiculous. And he pointed out that in the United States the monetary base had quadrupled and in the European Union it had doubled, and yet, not only were prices not rising but there was deflation.

Around that time, too Mercedes Marcó del Pont – Today one of the economic ideologues of the government – used to complain that Argentina was the only country in the world in which it was still argued that issuing money is synonymous with price increases.

Of course, the Gresham ingredient was missing in the analysis: the issuance of money can have very different effects if what comes out of “the little machine” is the good or the bad currency.

There is good and bad

The truth is that today there are not a few who believe – like the FT itself – that the global quarantine can generate deflation rather than inflation.

But of course, Argentina poses a different scenario. And the danger that many are seeing is that the monster unleashed in the form of mega monetary issue is not so easy to tame once the health situation has normalized.

A report from the consultant Eco go, directed by Marina dal Poggetto, points out that the monetary base, which came from levels of 10% of GDP, is climbing to 16%.

“Obviously, this increase in the demand for pesos is not feasible, even with stocks and a recomposition in the margin of the BCRA reserves,” he argues.

And he makes a disturbing forecast: “As the levers of the economy are lifted, the monetary surplus could begin to press against a demand for money that was very weak before the shock.”

On the other hand, investment banks They have released reports warning that everything could get worse if the issue of debt swap, because that would drastically lower the demand for money.

The truth is that the day after quarantine you will find the economy with double weights.

And there may occur another effect observed by Gresham: that even if the amount of money does not continue to expand, an increase in the speed of circulation can have the effect of devaluing the bad currency against the good one. Also at that point, Argentine history shows disturbing antecedents: during the inflationary explosion of the 1980s, even if the “little machine” was stopped, the Argentines also got rid of the Australes, who changed hands at a rate of 100 times per year , eight times faster than when the new currency had been installed. 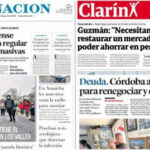