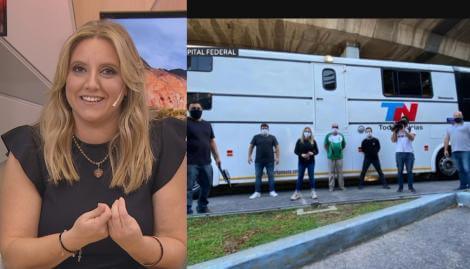 The night of this Saturday had an emotional moment in the air of TN when in the special of “A country in quarantine ”, the journalist Paula Bernini, in charge of the shipment, was excited to review the journey that led her to travel the entire country aboard the TN bus.

A trip from north to south of Argentina, which started in March and spread for 40 days, to know how quarantine is lived in the different corners of the country.

“We learned from the voices of the protagonists themselves. We take hundreds of anecdotes, places, people, and moments of coexistence with colleagues, which we will keep forever, “said the journalist.

“It was a tiring, difficult trip, but I really enjoyed it,” acknowledged Bernini. At the same time, he took the opportunity to thank and greet all the people he met on this trip, and who gave him countless displays of affection.

Finally, he made a special mention for his teammates, and she was moved to tears. “You can’t make television without all the people behind you. I am infinitely grateful to my team that accompanied me and made all this possible. It was 40 cool days and where we all respect each other. The respect personally and professionally was incredible. It was an incredible work and personal experience. I’m very happy“He concluded.