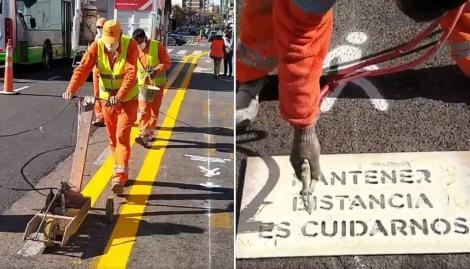 The City Government began this Saturday to paint the lanes of streets and avenues to use them as pedestrian spaces. The measure aims to encourage neighborhood commerce and at the same time guarantee compliance with social distancing on public roads due to the coronavirus pandemic.

According to the head of the Buenos Aires Government Horacio Rodríguez Larreta during a press conference where he provided details of the flexibility in the new stage of the quarantine, they will be expanded more than 100 pedestrian spaces on streets and avenues and sidewalks will intervene to encourage neighborhood trade, without breaking the quarantine and the social, preventive and obligatory distancing.

In the new stage of quarantine, it is important that you continue to maintain social distance when you leave your home. For this reason, many streets are being intervened to become partially or totally pedestrianized. Find out what they are by clicking below the video.

“It will be an important transformation of the City. We are going to widen lanes to the pedestrian space and in places where there are more commercial premises we will directly cut the street “, the head of government detailed.

One of the measures will be expansion of sidewalks in commercial areas with the use of some lanes of the road for the circulation of pedestrians through partial cuts that will operate 24 hours in the form of pedestrian corridors.

According to the schedule, they will be located in 18 points of the City, mainly on Triunvirato, Federico Lacroze, Cabildo, San Martín and Rivadavia avenues; among other.

Also on high traffic sidewalks, places will be demarcated so that pedestrians and customers know where to stand when queuing or driving, and to be able to maintain a distance of one and a half meters, as in the case of pedestrians. Florida, Santa Fe, Callao, Córdoba and Juan B. Justo avenues,

In addition, the total closure of streets in shopping centers with a large pedestrian influx, such as the Historic District, Liniers, Primera Junta and the Chinatown, among others in which cuts will be made from 8 to 20.

Regarding the reopening of neighborhood supply fairs, the Buenos Aires Government allowed them to do so in turn, some on Mondays and others from Tuesday to Sunday.

To complete the measures, City spokespersons reported that they will indicate new maximum speeds for vehicle circulation, with the aim of guaranteeing the safety of pedestrians. In the avenues they will pass from 60 to 50 kilometers per hour, and in the streets reconfigured blocks will decrease 40 to 30.

The Buenos Aires Minister of Public Space Clara Muzzio highlighted in dialogue with TN which works to “have 100 pedestrian streets in the most important commercial axes of different neighborhoods” with the aim of respecting social distance as a result of the opening of various shops and neighborhood fairs.

“The idea is to accompany a health measure, to respect the social distancing of people when going out to shop in shops for non-essential activities, according to the termination of your DNI, even or odd, and that coincides with the corresponding day, “Muzzio clarified.

The official recalled that there will be Public Space inspectors and City Police officers to control the measurement.

“We also appeal to individual responsibility and remember that it is very important that we stay in our homes, but we understand the need for merchants to open businesses, ” said the minister. 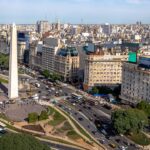 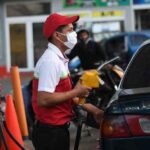