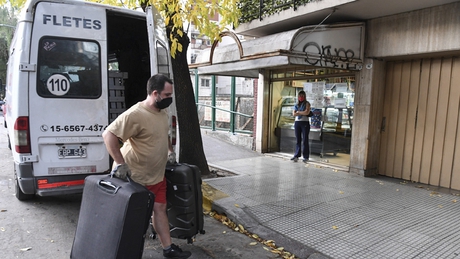 This activity was prohibited since March 20, when the isolation began. The tasks can only be done on Saturdays and Sundays

With an intense movement of trucks and freight during the morning, the first day enabled for removals in the City of Buenos Aires, which can only be done on weekends in this new phase of the coronavirus quarantine.

This activity was prohibited since March 20, when preventive and compulsory social isolation began due to the coronavirus pandemic.

From today, the Buenosairean government enabled it for Saturdays and Sundays. And it is added to other measures that were taken, tending to make the quarantine more flexible, among which are the reopening of local shops and the recreational outings for children from this weekend.

With masks and gloves, five employees made a move to Avenida del Libertador at 8,000. “It is the first day of work after a long time. We start at 7 but we will be at least until 3,” Gustavo, one of the workers, told Telam.

The team also disinfected boxes and furniture with an alcohol solution diluted in water. “All these prevention measures make work difficult and it takes longer. We make a lot of physical effort and with the chinstrap it is difficult to breathe, it also falls,” added his partner, Fernando.

They also shared that the enabling driving license for removals they asked for it in several controls.

In Nuñez, on Juana Azurduy street at 2100, five other men made a move, also using prevention elements, which included the social distance between them.

“This is one of the five removals that we have today. We are a small company. In general, on a Saturday we have one or two, but today we have five,” Guillermo, in charge of the work team, told this agency.

“We were quarantined in the middle. Two months without work is having no income for us,” he added.

And he shared that some clients “were in the middle of a move, so they had to pay double rent.”

The evaluation of the situation of the Covid-19 in the district by the Buenos Aires authorities will have Tuesday 19 as a key date, since that day will be one week after the start of the reactivation of shops and will be a few days after the end of the isolation phase ordered by the national government.

Next week, the head of the Buenos Aires Government, Horacio Rodríguez Larreta, will meet; the Deputy Head of Government, Diego Santilli, and the health authorities to focus on the results of the four indicators of “social behavior” in the City during the quarantine stage.

Public transportation will be one of the factors to be evaluated

Buenos Aires Government sources specified that the analysis will be aimed at the evolution of the coronavirus transmission curve in the City, the mobility of people in the public transport, the qualification of a score of items of neighborhood businesses considered non-essential and the impact of authorization for leisure walks with children which will be done the weekend for the first time.

“The combination of these factors will be what will define how we continue with this quarantine,” said the Buenos Aires Minister of Health, Fernán Quirós, at a press conference this Friday, in which he indicated that the options could range from “sustaining the measures adopted” with respect to the relaxation of isolation, “expanding or retracing them.”

However, he noted that “there is a contagion curve ahead that will evolve” in the City of Buenos Aires and the Metropolitan Area, which groups 40 Buenos Aires municipalities and where about 80% of coronavirus cases are concentrated, in So much so that he estimated that this growth in records will occur “in late May or early June.” 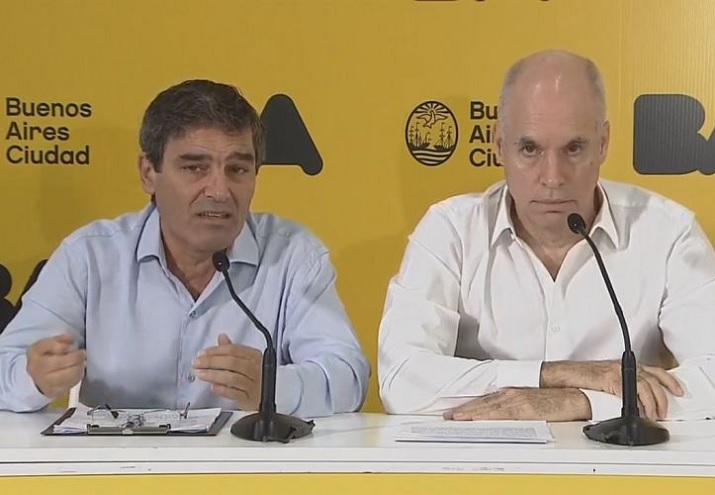 “When the curve starts to accelerate naturally we are going to have to discuss more restrictive physical distance measures because it is what all the countries of the world did to take care of their citizens, “said the minister.

According to the latest report from Buenos Aires, the confirmed cases of covid-19 in the Federal Capital add up to 3,239, of which some 972 correspond to inhabitants of vulnerable neighborhoods, one of the fronts that cause the most concern to the national and City governments. that, consequently, jointly deployed the Detect program in the 31 neighborhood of Retiro and the 1-11-14 of Bajo Flores.

The health initiative seeks to test people with covid-19 symptoms to give them early care and isolate them if necessary, and which is completed with the search for the close contacts of the sick and on Monday it will also be held in the 21-24 neighborhood of Barracas and on the Zavaleta boundary.

The other aspect that they have under the magnifying glass in the City is the mobility of people in public transport within the district, but also what contemplates the movement of people to and from the municipalities of the Province of Buenos Aires. 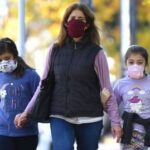 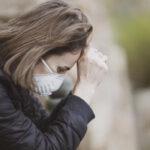