The independent senator, Lilly Tellezit made noise again in social networks. This afternoon through his Twitter account he wrote: “I thought they were going against the power mafia … but it seems that they hand over power to the mafia”, Message that caused all kinds of reactions among netizens.

And it is that despite the fact that the legislator did not give names, in the last hours an investigation of Mexicans Against Corruption and Impunity (MCCI) uncovered the purchase of 20 respiratory ventilators by the delegation of the Mexican Institute of Social Security (IMSS) in Hidalgo to the company Cyber ​​Robotics Solutions, owned by Manuel Bartlett’s son, the general director of the Federal Electricity Commission (CFE).

In addition, of the alleged conflict of interest, the contract was made at a price much higher than the marketwhich was from more than 31 million pesos, according to what was published this Friday by MCCI.

About, Zoé Robledo, general director of the Mexican Social Security Institute (IMSS), said that they are in communication with the Public Function Secretary (SFP) to make the purchase of fans transparent, including the contract made with Bartlett’s son.

Hours before, the IMSS delegate in Hidalgo, Claudia Diaz, reiterated that the purchase of fans from the CFE director’s son it adhered to the law and the most important criterion was used, which is to save lives in the context of the coronavirus pandemic or COVID-19.

While Manuel Bartlett son reiterated that the sale of fans there was nothing illegal as some want to see and the requirements to fulfill the award were met.

It should be mentioned that it is not the first time that the former communicator throw hints to the positions of the Federal Government and its dependencies, causing controversy.

A few days ago, he shared on the same account a paperboard from the newspaper cartoonist Reform “Paco Calderón ”, where he represented the incongruity of the so-called “Fourth Transformation” (4T) in the acquisition of respiratory ventilators from the United States, While María Elena Álvarez-Buylla, general director of the National Council of Science and Technology (Conacyt) used the concept “neoliberal science”, A form of rejection of everything that has to do with the capitalist economic system.

Similarly, a few days before he pointed out that the CFE must disregard its commitment to the State of Sonora and guarantee the subsidy for the families of the entity.

“We demand justice for desert citizens: they owe us the rate according to the climate and discount in the event of a health emergency“He wrote using the hashtag”#NoMeGustaElModito”, Referring to what the president said Andrés Manuel López Obrador of how the entrepreneurs established agreements with the Inter-American Development Bank (IDB) without asking the Federal Government.

On April 14, Lilly Téllez announced his departure from the Morena bench in the upper house, under the argument that it has “differences in criteria”With the rest of the parliamentary group.

In a message also published on Twitter, Téllez thanked the support of Alfonso Durazo, a licensed senator and current secretary of federal security; of Ricardo Monreal, Morena’s coordinator in the Senate of the Republic, and President López Obrador.

The senator assured that will remain active in this Legislature, as a legislator without a party and “committed to continue speaking the truth.”

As far as the 64 LegislatureTellez had had moments of tension with other teammates due to issues like abortion right, which she opposes.

During March 2019, when a group of legislators organized a demonstration for the right to abortion in plenary, Tellez claimed that someone had left a green scarf, to which he referred in a derogatory tone as “a rag“

In that same session, he discussed the matter with Morenoites like Citlalli Hernández, who is fighting for reforms so that in Mexico women have the right to decide about their bodies and to access legal and safe abortions.

At the end of 2019, the National Commission of Honesty and Justice of Morena asked the caucus expel Tellez from their ranks, arguing that the legislator did not represent the party’s principles.

However, Tellez received the support of his then fellow parliamentary group and the TElectoral Court of the Federal Judicial Branch (TEPJF) also determined to revoke said order.

Tellez, who gained public fame with his work as a journalist on the network Aztec TV, approached Morena in early 2018. At that time, the party gave him a candidacy for the Senate for the state of Sonora. 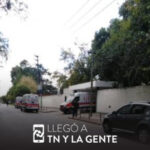