Inflation in Spain went into negative territory in April, with a 0.6% drop in prices over a year, according to provisional figures published this Thursday by the National Statistics Institute (INE).

In March, inflation increased 0.1%, according to the harmonized consumer price index, used as a reference by the European Central Bank.

The main factor was “the decrease in fuel and fuel prices, compared to the rise registered in 2019,” the INE explained in its statement.

This decline occurs in the context of the collapse of oil prices worldwide due to the new coronavirus pandemic.

Conversely, prices of food products increased by 4% year-on-year (compared with a rise of 2.5% in March), with a particularly marked rise in fresh products (+ 6.9%).

The INE points out that the situation of confinement in Spain has meant “an unprecedented situation” to calculate inflation in April, since a part of the goods or services usually studied have not been available since mid-March.

For this reason, the INE modified its product baskets to take this situation into account.

“It should be added that the collection of prices has had to be carried out entirely by telematic methods,” said the institute.

Spain, the fourth country in the world with the most deaths due to COVID-19, has maintained since March 14 a strict confinement to avoid infections, which included two weeks of stoppage of all non-essential economic activities.

The confinement will be progressively relaxed in the coming weeks. 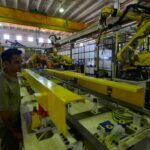