A large group of merchants gathered in the so-called United Merchants Network advances in the intention of opening their businesses to the public from Monday 11; a possibility that until 10 is prohibited in the city of Córdoba and other “red zones” in the context of quarantine.

While awaiting the definition of the Nation and Province on what this new section of isolation will be like, the Network works on the stage it claims: the reopening of shops to the public.

For this, it presented to the capital municipality and to the Department of Commerce of the Province an operating protocol that includes measures aimed at lowering risks of contagion. Most of them are in tune with collections applied in other activities that are being launched.

The next step is supposed to be that the protocol be turned over to the Emergency Operations Center (COE), a provincial body dedicated to analyzing them and authorizing or not the restitution of activities.

From the Córdoba Chamber of Commerce they indicated that they accompanied with their signature the presentation of the protocol. It is worth clarifying, however, that the group of self-convened in the Network carries out the campaign of “opening 11” autonomously.

The proposal of the Network implies opening in a reduced schedule of six hours, and with a start that is not trodden with the opening of banks and industries, in order to help avoid saturation of the public in the public transport system; considered a critical space for the spread of Covid-19.

The Network suggests that shops open from 9:30 to 15:30. At the same time, to the extent possible, it proposes a system of rotating shifts for staff and stresses that those over 60 years of age and people at risk are exempt from attending.

Here are the 11 points that describe the “new normality” with which downtown commerce proposes to operate:

1-The Personnel who remain within the commercial office, will wear a mask or mask at all times and must always use it for customer service.

2-Customers will be provided with devices for hand sanitization (gel alcohol or alcohol diluted 70%) before entering the premises.

3-Customer Service will be maintaining the social distance of 1.5 m away.

4-In case of passing the client to the premises of less than 50m2 it will be made to one person, the others must remain outside the premises. Only those who have a social mask and who comply with the established exceptions may enter.

5-The surfaces, furniture, shelving, doorknobs, or other element that the client can use must be cleaned before and after the client’s admission. A surface alcohol solution diluted to 70 percent Lavandin diluted to 40 percent will be used to clean surfaces.

6- It is recommended to clean the floor of the premises at the opening and closing of the same and use with a 40% bleach or bleach water solution diluted in water.

7- Outside the premises and within the premises where the clients have to wait, it will be marked on the floor by sticking yellow or colored tape that contrasts with the color of the floor, at a meter and a half each, so that people wait with distance.

8- Controlled access in the galleries to avoid crowding and excessive circulation of people controlled by security guards who are full of masks, gloves and masks. In the common spaces, the floors must be cleaned at the opening and closing of the same, and not allow more than 3 hours to pass between cleaning, it will be used with a bleach or 40-percent bleach solution diluted in water.

9-In case the client wants to measure a garment, the garment that the person tries on must be sprayed with diluted alcohol, before and after doing it. It is recommended to avoid this type of practice.

10- We will inform the public of said protocol at the entrances to commercial premises and galleries.

11- Avoid shared use of utensils such as pens, pencils, etc. 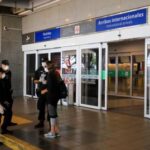