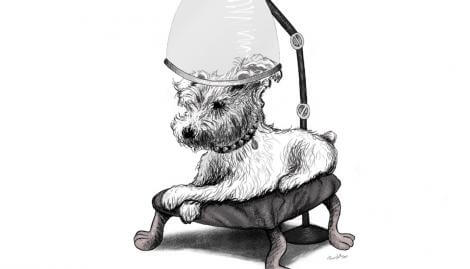 As someone who regularly walks their dog – in this case an energetic white miniature schnauzer named Gogo – I occasionally have a regular conversation with other dog owners: where and how to get their hair cut. Asking “where” could imply that I take her to a professional, but it is not my case, so we proceed to “how”. Normally, when I say that I cut it myself, the other owners comment that they feel they should learn how to do it. Today, with so many people trapped in their homes with almost no dog groomers available, some people are reconsidering their initial resistance. How difficult can it be? What could go wrong?

Many things. Your dog could end up looking like mine on some unfortunate occasions: as a rare thing that defies all American Kennel Club standards. The bigger the dog is, the greater the area where you can make mistakes. But if you are willing to take the risk and are good with practical projects, then go ahead. Just remember that you were warned.

The first thing you need is a place to get the job done. A room that, first, is large enough and, second, is casual enough for don’t mind me ending up covered in floating strands dog hair. You might think that doing it outside the house would be a better option. But unless your outdoor space is an open field on your farm, it is not ideal. The terrace, fire escape, hallway or garage entrance offer enough free space for both of you as well as a refreshing breeze. And that is precisely the problem: as soon as you start making the cut, the breeze will blow your hair and spread it all over the street. Even if that doesn’t create a problem for you, you would be subjecting your neighbors to a rare but obvious form of contamination.

Then you have to decide if you are going to do it on the floor or on a table. A work table that can support your dog is ideal, although it is not practical for everyone. Soil is a simpler decision, since most people have floor to spare, but keep in mind the following: after sitting for 30 minutes, hunched over your dog, you will start to feel tense and grumpy.

The high cost of making cuts

You need a good dog shaver. When I started a few years ago, I bought a basic pet machine that cost $ 40. I watched a video on how to achieve the classic schnauzer cut and proceeded to anchor Gogo with two straps extended and adjusted in opposite directions. As soon as I started the machine, she and I jumped out of shock; the apparatus was not silent at all. Once we calmed down and started making the cut, it got stuck after just a few inches. I cleaned the hair from the machine and started again. Another obstruction made me stop, remove my hair, and start again. And so over and over again. I remember looking at the box to make sure that thing was for dogs. Two hours later, I finally finished, covered in sweat and in something that looked and felt like an angora sweater.

What I quickly learned was that dog grooming, like many other things in life, It improves a lot when you invest some money. So even though it was going to cost twice as much as the shaver I use for my own head, I decided to spend around $ 170 on a two-speed Andis Ultraedge AGC 2. The difference was impressive: easily slid down his fur and it didn’t get stuck even once, not even when it got full of hair. The only annoying thing about the machine is the thick, unwieldy cable. But after seeing some reviews of cordless shavers, I convinced myself that it would do better with a high-performance model with a cable.

Since the machine’s standard 1.588-millimeter blade would practically completely shave a dog’s hair, I attached one of the eight plastic graduated guide combs hoping to achieve a nice and uniform coat height of 12 millimeters. However, even with the expensive machine, the process was not easy. Gogo still shuddered and he moved constantly, especially when it came time to shave his head and legs, where his hair is as difficult to cut as it is easy on the body. At the end of the cut, Gogo looked good, although not identifiable as a schnauzer at all.

For the next cut, I decided to start with the legs. They were so difficult to trim that I removed the guide comb, and I had a fantastic revelation. I thought that using the blade directly on the dog’s skin could be irritating and even dangerous. But as soon as I removed the guide comb, Gogo calmed down. The comb, with its sharp plastic tips, had been more irritating, not less. I shaved it from the tail to the toes with nothing but the machine blade, and it took me half the time. Be very careful around the eyes and ears, but even there, the process is easier with the pure blade. Dede Croy, the channel’s dog groomer My Favorite Groomer from YouTube stated in an interview that dogs generally tThe shaver will smell more without the guide combs.

Stripped of her schnauzer outfit, Gogo resembled an all-white Jack Russell terrier. The blade had cut both her hair that looked shaved, and a kind of turkey thawing. However, the ease of using only the blade overcame my aesthetic concerns. I hadn’t found out that there were blades that cut different lengths. Then I found out, and after making my way through the expensive and confusing world of razor blades, I decided on an Andis number 63030, which cuts hair at a height worth 6 millimeters and it has a ceramic edge, which is supposed to keep its edge longer. The bottom line is more like a Jack Russell and less like a thawed turkey. You will probably buy me a blade that cuts 19 millimeters soon.

No matter if you become adept at handling your shaver, there will always be small strands of hair in difficult parts that will be challenging, especially near the eyes, ears and paws. To beat them, you will need another machine. I tried several that were a complete failure. Desperate, I even tried a machine to cut human nose hairs. Then I found the Turn Raise Pet Shaver, a small cordless trimmer that it is a blessing for the silent, with a head just 12 millimeters wide. The delicate buzz of its blade keeps the dog calm, but it has the strength to cut its hair and not get stuck every 10 seconds. It is ideal for cutting small, complicated locks around the joints, dewclaws and ears. I use scissors only as a last resort; those are best handled by experts.

In short, cutting your dog’s hair is never easy, even if you have an expensive razor and razor that won’t shear your schnoodle like a sheep. Make a couple of test cuts (i.e. a couple of disasters) and don’t try to do anything elaborate for about a year. Although I have been doing Gogo four or five haircuts a year for several years, I cannot say that he was ever impeccable. However, it once caught the eye of a talent scout at the dog park and ended up in two advertising campaigns. Before shooting the first one, I nervously asked the agent, “They know she doesn’t really look like a schnauzer, do they?” The agent was blunt. “That’s why they like it.”