After 58 days of quarantine in the City, finally came the moment that thousands of children and parents expected: from this Saturday on children under 16 can do recreational outings on weekends. And they were lucky, the weather will accompany this journey.

According to the Buenosairean government, the boys will be able to circulate for one hour (maximum), with his father or mother or a guardian in charge, at a distance of no more than 500 meters from his home. Parks and squares will not be opened. The idea is that there are no crowds and that social distance is respected.

The departures will take place according to the termination of the adult’s DNI. On even days, like this Saturday, May 16, those with a parent with an even document will be able to go out, and on odd days, those with an odd document. The boys of less than six years they can go out without masks.

Those who enjoy these walks should be clear that sports are not allowed.

The boys’ return to the streets

Since the coronavirus crisis began, boys they almost disappeared from the city. They were considered “possible asymptomatic transmitters of COVID-19” and their absence did not give rise to the same tolerance as the ban on leaving for those over 70 years that the Buenos Aires Government wanted to impose. The authorities even had to go out to clarify that mothers and fathers alone can take their children to shop.

Several pediatricians and Unicef ​​demanded that recreational outings be enabled for avoid psychological harm by prolonged confinement. And from today they will be able to leave. With responsibility and rigorous care.

“Remember to tell them the truth and be clear with the information so as not to generate fear. The virus is not ‘outside’ in ‘the air’ but is a virus that is in people and in everything that comes into contact with them. that’s very important to use anticipatory measures, “wrote psychologist Sofia Lewicki days ago on her Instagram account.

For the output to develop in the best way, it is worth showing before “how the face mask works, and even playing with the dolls in case of resistance” and “explaining why it is so important not to touch anything, including your face, mouth and nose, “he advised.

It is also important to remind the boys of the hygiene protocol (hand washing, etc.) before leaving and before entering. And, although it seems obvious, don’t force them to leave if they don’t want to.

The head of Buenos Aires government Horacio Rodríguez Larreta assured this Friday that, in the first week of the new measures implemented during the quarantine in the City, people are complying with the social distance. However, the Buenos Aires Health Minister Fernán Quirós recalled that depending on the evolution of the epidemic, the flexibility measures could be “sustained”, “expanded or retraced”.

Everything you need to know about recreational outings

? The tours can be done Saturday and Sunday (from Saturday 5/16).

?‍?Daughters, sons, or minors in charge with an adult.

?For girls or boys up to and including 15 years old. Only on weekends.

OnThey are walks of one hour maximum.

AstaUp to 500 meters from each house.

❗ You must leave with the DNI of the father / mother / person in charge who takes them.

?People over 6 years of age are required to wear face masks.

⛲In squares and parks, you can only circulate on the internal sidewalks and paths as long as it is open (without bars).

And it is very important:

? You cannot do sports.

??‍♀️It is important that the ride lasts the entire hour, NOT on several short outings.

❌Do not play with other girls or boys.

?‍?‍?‍?Do not group in public spaces. 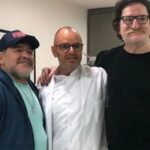