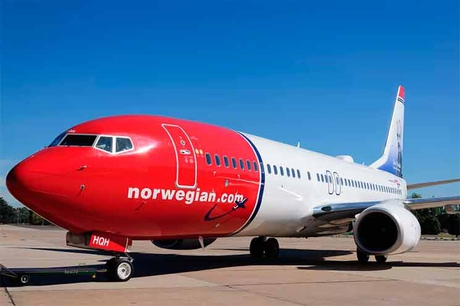 The situation of the airline Norwegian, already in crisis before the arrival of the pandemic, it worsened considerably as the days went by. As published by the preferente.com site, its survival goes through a complete restructuring, already begun, as well as a capital increase for an amount of between 445 and 594 million euros (4.5 and 6 billion crowns).

In a document sent to potential investors, the air Line recognizes that it could disappear in a matter of months if it does not achieve the aforementioned economic injection and its reconstruction does not conclude successfully.

Should this occur, “it is very likely that the company will enter a liquidation or bankruptcy process during the second or third quarter of 2021 “, it indicates verbatim.

This document advises that investing in the shares of Norwegian “It involves a particularly high degree of risk.”

“The company has been severely affected by the current outbreak of Covid-19. In a very short period of time, he has lost most of his income, is in adverse financial difficulties and is at risk of bankruptcy, “he says (Norwegian, desperate: offering stocks instead of redemptions).

“This has materially and adversely affected the group’s contracts, rights and obligations, including financing agreements“It continues. Finally, it warns investors of the negative effect that the issuance of new shares will have, explaining that the sale of a substantial number” may have a negative effect on the trading price of the shares and even on the ability to shareholders to sell them on attractive terms. ”

In December, Norwegian announced that it was filing a pre-bankruptcy for three of the companies that are part of its group in Spain: Norwegian Air Resources Spain, Red Handling Spain and Red Maintenance Spain.

On December 8, he had asked a Norwegian court to open a bankruptcy process, while in Ireland the request for protection of two subsidiaries to avoid bankruptcy was accepted.

Norwegian Air Resources Spain is the corporation that employs the crew of the entire Scandinavian group based in Spain (both pilots and cabin crew), Red Maintenance Spain provides maintenance services and Red Handling Spain is the company that offers assistance in land at some of the Spanish airports where the airline can operate.

The airline had suspended 100,000 seats on flights to Spain at Christmas

Norwegian has a fourth subsidiary company in Spain called Norwegian Air Resources Shared Service Center, which employs administrative staff working at the company’s corporate headquarters in Barcelona, ​​although this company has not submitted a pre-tender.

Norwegian had cut 100,000 seats on flights to Spain this Christmas after filing bankruptcy in Norway. According to okdiario, the employees of the Norwegian airline that operate in Spanish airports will continue in ERTE until the low cost economic situation clears up.