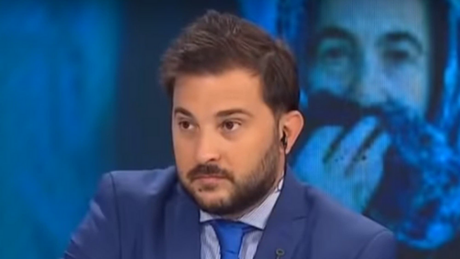 The journalist referred in his social networks to the increase in the price of gasoline announced on Thursday by the president of YPF, Pablo González

“You asked us to mark when something is not right. Well. This is not how it works,” Diego Brancatelli wrote on his Twitter account, addressing President Alberto Fernández. His words make direct reference to the increase in the price of gasoline set by YPF, which will be reflected in the pumps from this Saturday.

“Mr. President, the pocket of the Argentines cannot support another increase in gasoline. Enough. It is a shame. It would be a good gesture to stop this new rise“wrote the panelist for Intratables and immediately garnered thousands of” likes “, hundreds of retweets and responses to his post.

Brancatelli questioned the new increase in gasoline, decided by YPF

The statements of the journalist, whose stance in favor of the Government is public, come from the announcements made on Thursday morning by the president of YPF, Pablo González, who said that starting on Saturday, fuels will increase throughout the country by a 6%, on average. He also assured that it is the last rise of the year, and that in 2021 “gasoline will increase less than the 29% inflation forecast in the budget.”

Although the decision came from YPF in order to finance investments, the rest of the oil companies are also expected to alter their prices in the coming days.

These days Diego Brancatelli is recovering, after have been hospitalized for almost a week due to a complication in his coronavirus picture. Over the weekend, he returned home with his wife, Cecilia Insinga, and their two children, Valentín and Luca, whom he had not seen since the end of April when he was diagnosed with the virus, since it was isolated so as not to infect them. Anyway, his wife got it too.

“I recovered my voice a lot,” the panelist said happily in dialogue with Paulo Vilouta on radio La Red on Monday, and was amazed: “It’s incredible, this does not have linear stories or repetitions, it can be given in one way or another. The great battle is being with you and talking, but I lost all the little battles: first I wanted not to have (coronavirus), then I had no symptoms, then fever, a day or two he left, I had a good time and then they did CT scans, my lung was fine and I started with a cough and hiccups.

When Brancatelli had been in isolation for about nine days, Insinga underwent a positive test. “Cecilia took him with symptoms, fever, without taste and alone with the two boys. On Thursday she would be discharged and we will try to return to normal life, because this agitates you.” When he thought he would be discharged, he saw the doctor again: “On Sunday, ten days later, I had a fever. The doctor performed a CT scan and diagnosed me with bilateral pneumonia. It was decided to hospitalize, and the great nightmare began: I wanted to avoid the respirator and that’s the battle I won. “