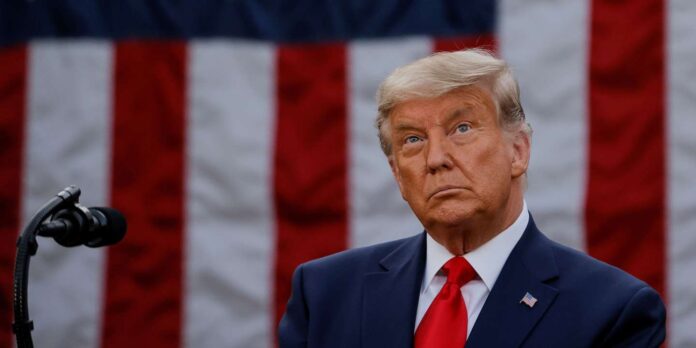 US President Donald Trump, who continues to deny defeat in the US election, attends the Asia-Pacific Economic Forum (APEC) meeting on Friday, November 20. The summit, hosted by Malaysia, is taking place online this year due to the Covid-19 pandemic.

It brings together the 21 countries of the Pacific Rim, including the world’s two largest economies, the United States and China, which represent some 60% of global GDP. At the opening of the summit, Chinese President Xi Jinping on Thursday presented his country as the engine of world trade, and promised to“Open the doors even more” of its national market.

Beijing has seen its role in APEC strengthened in recent years as a result of the political “America first” of Donald Trump and his withdrawal from multilateral institutions. The American president has not participated in recent weeks in summits with the Asian leaders of ASEAN.

His administration had been unclear in recent days over US participation in the APEC meeting, but a senior US official confirmed Thursday to Agence France-Presse that President Trump would speak on Friday night. He is expected to address the forum leaders in an address that will be largely closed to media, according to organizers in Malaysia.

Accusations of fraud without proof

Donald Trump has not attended APEC meetings since 2017, which was seen in Asia as a sign of disinterest. The President of the United States, who refuses to acknowledge his defeat to Democrat Joe Biden, seeks with this intervention to “To adopt a ‘presidential’ posture on the world stage”, said Oh Ei-sun, an analyst at the Singapore Institute for International Affairs.

“Trump will, of course, want to seize this opportunity to present himself as a sitting president and reap the benefits of domestic politics”, he explained, adding that he should also “To re-emphasize protectionism and the process aimed at preventing China from claiming the leading role in the free trade game”.

Since the November 3 ballot, Donald Trump has repeatedly asserted, without proof, that the US presidential election and the vote count were tainted with fraud. His team has launched multiple legal actions as his supporters try to pressure local officials not to certify the vote counts.

The US president took a hard line with China during his tenure, imposing a series of tariff surcharges and barriers to its tech sector on the world’s second-largest economy, while Joe Biden’s administration is expected to take a more nuanced stance towards China.

“We must not repeat the mistakes of history”

This APEC summit is being held less than a week after the signing of the world’s largest free trade agreement between China and 14 other Asia-Pacific countries. This Regional Comprehensive Economic Partnership (RCEP), signed without India or the United States, is seen as a victory for Beijing, at the origin of the initiative, and proof of the growing Chinese influence on the rules of the International trade.

Signatories hope the deal will help virus-wracked economies recover, and several APEC leaders have warned of the temptation to protectionism.

“Trade has been the engine of APEC’s growth and prosperity since its inception thirty years ago”, underlined New Zealand Prime Minister Jacinda Ardern. “Faced with the great economic challenges, we must not repeat the mistakes of history and take refuge in protectionism”. Japanese Prime Minister Yoshihide Suga insisted on his side that “Defining the rules for a free and fair world economy was of critical importance”.

Previous APEC meetings had been clouded by escalating trade tensions between Beijing and Washington. In 2018, at the last summit, the leaders of the Pacific Rim failed to agree on a joint declaration.

Sick of Covid-19, Donald Trump is “not yet completely out of...

several hundred arrests on another Sunday of protest

this is how industry and construction fell in 2020 / Argentina...

This is the new BMW 2 Series Gran Coupé

Coronavirus in Argentina | Point by point, what changes with the...

Richard and Mildred Loving, the love that changed America / Argentina...