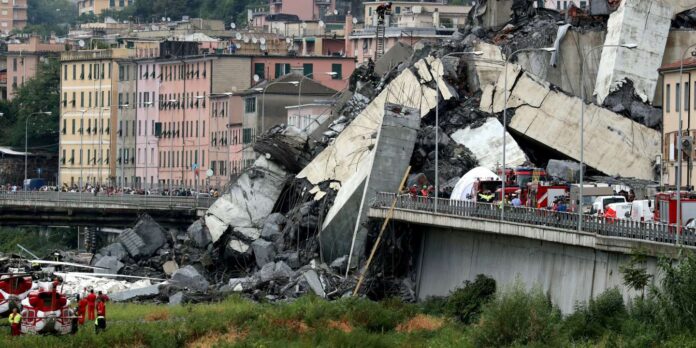 As part of an additional investigation into the Genoa bridge which collapsed in 2018, the Italian financial police announced on Wednesday November 11 that they had taken several measures against former and current Autostrade per l’Italia officials. (ASPI) – a subsidiary of Atlantia (Benetton family) which manages the Italian highways.

In a statement, the financial police said three officials were under house arrest and three others under “Prohibition measures”, without further details: they are suspected of having committed transport security breaches and defrauding public supplies. Police suspect them of having been aware of safety faults in the bridge’s noise barriers and their potential danger, but of not carrying out the replacement work. The risk was particularly high in strong winds.

According to Italian agencies, former Autostrade CEO Giovanni Castellucci, who was also boss of Atlantia, is among those under house arrest. This announcement caused the price of Atlantia to drop on the Milan Stock Exchange. By mid-afternoon it was down 2.42%, after losing nearly 5%.

“ASPI has transformed itself, over the years, into an automatic cash machine”

According to Italian agencies citing the ordinance that led to these house arrest, the resin used for the barriers did not have European CE approval. According to them, a technician intercepted on the phone claimed that the barriers were stuck “With Vinavil”, a simple glue used in Italian homes, in order to save as much money as possible. One hundred and forty million euros would have been needed to do the work properly. Or M. Castellucci “Was fully aware of the issue of barriers and constantly informed for their management, which he fully endorsed”, provides the prescription.

This ancillary investigation was launched a year ago, alongside the main investigation into the Genoa Bridge collapse that left 43 people dead in August 2018.

“ASPI has transformed itself over the years into an automatic cash machine [pour ses propriétaires] to the detriment of the security of citizens ”, denounced elected officials of the 5-star Movement (M5S, anti-system), members of the transport committee in Parliament. “It emerges from this investigation and listening to the dramatic lightness with which the managers, while knowing the dangerousness of materials for motorists, have managed and carried out maintenance on the highways under their jurisdiction”, concluded the elected officials.

for surcharges in FOOD, 12 SUPERMARKETS close

The debut of the new new excepted activities, on the covers...

new stage in the City

Up to 40% cheaper: digital auction of real estate in Córdoba,...

Who pays the cost of the change in Earnings / Argentina...

“The Sahel, a region of hope which must now wake up...