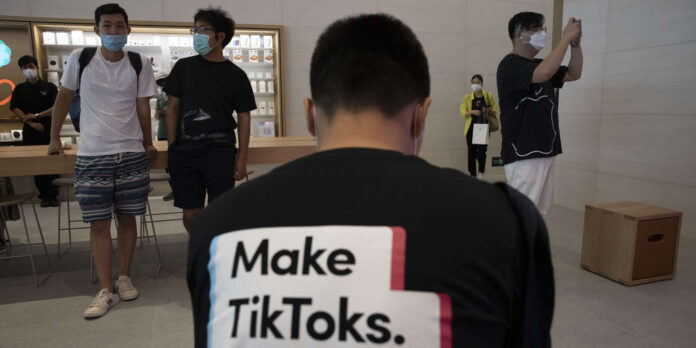 The technological war between the United States and China continues, the Americans not supporting the emergence of Chinese technological giants unavoidable in the West. After Huawei, the champion of 5G, whose boycott they are trying to orchestrate, it is the turn of the video application TikTok to be in Washington’s sights. The Trump administration will force the sale of the social network to American interests. The app has been a huge success worldwide, including in the United States, with 180 million downloads. If it fails, the US president threatens to ban him from his territory.

The most likely hypothesis is a takeover of the company’s US operations by Microsoft, which intends to continue negotiations and complete them by September 15 – a deadline set by the White House. This is what the company said in the wake of an interview between its CEO Satya Nadella and President Donald Trump.

The latter said Monday, August 3, that he would let Microsoft carry out these discussions. “I said, see, this can’t be controlled by China for security reasons. That’s the deal, I don’t mind whether it’s Microsoft or somebody else, a big company, a safe company, a very American company can buy it “Mr. Trump said. He said, without giving further details, that the US Treasury should benefit from the deal, since nothing can be done without it. And he finally suggested that Microsoft buy the entire company.

Secret negotiations were underway, nearing completion on Friday, when they were scuttled by Donald Trump, who spoke out in favor of an outright ban on the app. It is suspected of collecting data on American consumers and transmitting it to Chinese power, disseminating Chinese propaganda and censoring videos, especially those relating to Hong Kong. Recently, the US Department of Defense and Foreign Affairs banned the use of the application on the professional devices of their agents.

“Microsoft buying TikTok is a win-win”

The offensive was launched by Secretary of State Mike Pompeo in early July, who considered banning the application in the United States for security reasons. In the White House, there are two opposing camps: the most vocal anti-Chinese, including Vice President Mike Pence and trade adviser Peter Navarro, in favor of eliminating TikTok; and the supporters of a compromise which will allow an American company, Microsoft, to get their hands on a Chinese gem: among them, Treasury Secretary Steve Mnuchin, Mr. Pompeo and Republican senators, such as Marco Rubio (Florida), Chairman of the Intelligence Committee, and Lindsey Graham (South Carolina). The latter has tweeted : “Let’s have an American company like Microsoft that takes over TikTok. It’s a win-win situation. This keeps the competition alive and keeps data out of the reach of the Chinese Communist Party. “

You have 49.09% of this article to read. The rest is for subscribers only.

Alberto and Kicillof present DNI Account that serves to collect the...

The 3 most delicious banana desserts

The surfer dog that enchants with his skills on the beaches...

this is the millionaire fraud of an accountant / Argentina News

Grido will export 3 million chocolates per year to Bolivia

What are the signs that are best suited to confinement? /...

Coronavirus in Argentina: they sell the house where Raúl Alfonsín lived...

Nord Stream 2: US lawmakers agree to widen sanctions on Russian-German...

The Rothschild in love with finance, Spain and good wine dies ...