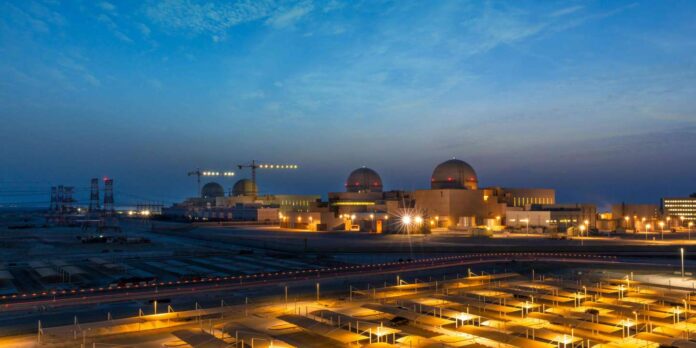 The United Arab Emirates (UAE) became, on Saturday 1er August, the first Arab country to have nuclear power, after the commissioning of reactor No. 1 at its Barakah power plant in the north-west of the country. Ultimately, this country, bringing together seven emirates or principalities (Abu Dhabi, Dubai, etc.), will produce a quarter of its electricity thanks to its four reactors (5,600 MW in total) built by a consortium associating the public group Emirates Nuclear Energy Corporation and the South Korean Korea Electric Power Corporation.

An investment of 24.4 billion dollars (22 billion euros) which will allow the fourth producer of the Organization of the Petroleum Exporting Countries to meet a growing demand for electricity for its 9.3 million inhabitants, foreigners essentially.

For the Emirates, joining the closed club of the thirty countries with civil atomic power confirms their commitment to carbon-free energies, while the use of large vehicles and residential air conditioning rank their inhabitants among the top emitters of CO2 of the planet. Nuclear power complements their ambitious solar energy projects. Latest illustration to date: the next construction, by EDF and its Chinese partner Jinko Power, of the most powerful photovoltaic power plant in the world (2,000 MW), near the capital, Abu Dhabi.

The atom joins other sectors to make the Emirates a player in science and technology. The head of state, Khalifa Ben Zayed Al-Nahyane, stressed that the commissioning of the plant ” comes a few days after the launch of the Probe of Hope “ (“Al Amal”) from Japan on July 19, the first Arab space mission to Mars. Finally, it is an object of power, since operating reactors – even with the help of foreign operators – strengthens the country’s image and international status.

The Saudis have more ambitious plans: fifteen reactors, in order to avoid burning more and more fuel oil and gas in power stations

In the Middle East, only Iran has a Russian-designed nuclear power plant. And within the Arab world, two regional powers are moving resolutely in this direction: Egypt and Saudi Arabia. The Egyptians are planning to launch the construction of four Russian third generation reactors at El-Dabaa, on the shores of the Mediterranean. Designed, built and largely pre-financed by the public giant Rosatom, the four VVER 1,200 are scheduled to be put into service at the end of the decade, which will above all make it possible to produce the current necessary for the desalination of seawater to supply the city of Alexandria.

You have 56.37% of this article to read. The rest is for subscribers only.

This is the most sophisticated drug tunnel discovered so far on...

In Georgia, the democratic issue at the heart of the legislative...

“The promotion of peace and the prevention of Covid-19 cannot exist...

the political nonsense of Poland and Hungary

What did ROCÍO OLIVA say about MARADONA’s health? / Argentina News

In Argentina, the government presents its bill to legalize abortion