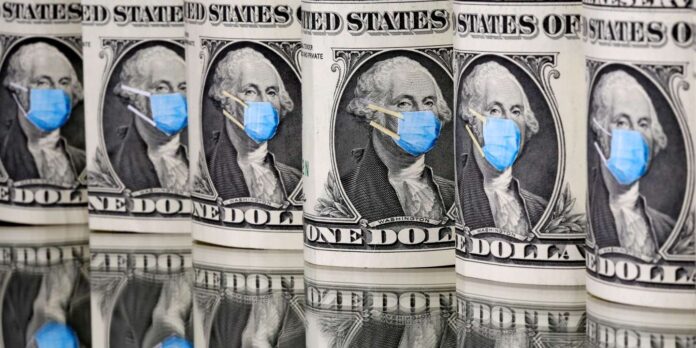 In times of major crisis, financial wisdom dictates that we take refuge in the blue chip, namely the dollar. And yet, the reverse is true. Since March, the US currency has lost nearly 12% against the euro, falling from 1.06 to 1.19 dollars at the end of July. The drop was 5% in July alone. It is at the same time little, as the economist Jean Pisani-Ferry recalls – the euro touched a low of 0.82 dollars in October 2000 and a historic high of 1.60 in July 2008, and since , it oscillates between 1.05 and 1.25, which remains reasonable. Yet it was a lot in the world of fixed quasi-exchange that had come to prevail. Mistrust is reflected in the surge in gold, which is breaking records and has risen 30% since the start of the year, with an ounce trading at $ 1,975, a sign of declining confidence in traditional currencies and a fear of the return of inflation.

The question is whether the fall of the dollar will accelerate and threaten its hegemony. “TINA: there is no alternative. “ There is no other choice but the dollar, investors have been saying for years, citing the Chinese stiffening and the euro’s congenital weakness. The dollar remains the reference reserve currency (62% of reserves, down only 2 points since 2008, notes the Financial Times) while the euro’s share has fallen from 28% to 20% since 2008.

However, Stephen Roach, professor at Yale University and former executive of Morgan Stanley, dismantles the “TINA”: he estimates in an article published by Bloomberg than “The exorbitant privilege of the dollar is coming to an end” and predicts a 35% drop in the greenback. Natixis chief economist Patrick Artus also expects a slip.

There are many explanations. First, the United States makes printing money more than the others. The budget deficit is expected to reach 23.8% of gross domestic product (GDP) in 2020, twice as much as in the euro area (11.7%), according to forecasts by the International Monetary Fund (IMF). Added to this is the policy of the US Federal Reserve (Fed), which has cut rates more than the European Central Bank (ECB), which could no longer with negative rates. Short-term US policy rates are now between 0% and 0.25%, one point lower than at the start of the pandemic. Above all, the Federal Reserve intervenes massively, buying the securities of American companies, officially to ensure market liquidity, in reality to avoid bankruptcy.

You have 55.39% of this article to read. The rest is for subscribers only.

COVID: Germans rushing to the hairdressers ′ | Germany | News and in-depth reporting from Berlin and beyond | DW /...

This system kills CORONAVIRUSES in CARS: how it works

The announcement about the new stage of quarantine, on the covers...

Japan, “a democracy without women”

An “autoshow” will be opened in Córdoba, which will survive the...

Trump bans Americans from investing in Chinese companies believed to be...

the opening of a ruled out international investigation

The first day of the 13th Industrial Colloquium ended: where is...

In Nagorno-Karabakh, the haunting “drone war”