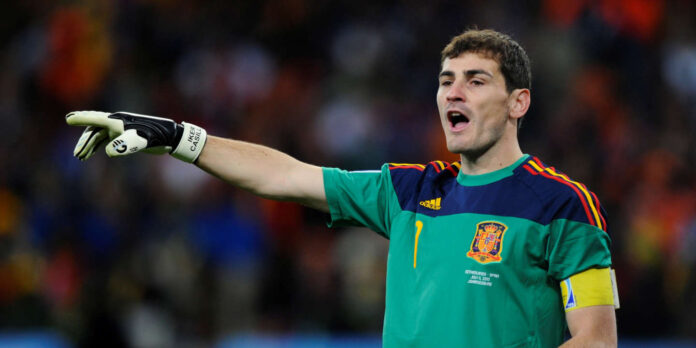 Iker Casillas, legendary goalkeeper of Spain, world champion in 2010, formalized his retirement on Tuesday, August 4 at the age of 39, a choice without much surprise after more than a year without playing as a result of heart failure.

“Today is both one of the most important and the most difficult days of my sporting life: the time to say goodbye has arrived”, wrote the doorman in a statement posted on social networks. With twenty-five titles during his career, including the 2010 World Cup, two Euros (2008, 2012) and three Champions Leagues (2000, 2002, 2014) with Real Madrid, he embodied the age of Spain football gold.

A heart attack during training in May 2019 had put a sudden stop to his career, after more than a thousand professional matches, even if he had remained formally a member this season of the squad of FC Porto, winner of the double Portuguese Championship-Cup.

The end of “San Iker”

Four years before the heart attack, it was with tears in his eyes that he had left Real Madrid, his lifelong club, to finish his career in Portugal. “Real Madrid demand a lot from you. Every year more ”, he summed up then, fatalist.

Despite this retirement in virtual anonymity, more than a year after his last professional match, he left the stadiums with a nickname that illustrates his place in the history of Spanish football: “San Iker”, the club’s guardian angel. Madrid and La Roja. Because for a long time, like Rafael Nadal in tennis, the Gasol brothers in basketball or Fernando Alonso in motorsports, the Madrid goalkeeper had symbolized triumphant Spain, far from the complexes of the past.

He will have been the unwavering goalkeeper of the Madrid club for fifteen years, and that of the Spanish side during his golden period, setting a selection record (167), since surpassed by his former partner Sergio Ramos (170, in progress). His culture of winning, he has for a time considered taking it off the field. In February, he ran for the presidency of the Royal Spanish Football Federation (RFEF), before resigning in June due to “The exceptional social, economic and health situation” from the country.

“We are going to beat the coronavirus”

ensure that there is no more place in intensive care in...

Alberto Fernández defended the judicial reform: “I have no idea how...

A hooded and crestfallen Rafael Amargo leaves the police station to...

In Lebanon, NGOs in order of battle in the face of...

married couple hiding their children in the trunk

Former North Korean ambassador to Italy defected to the South

Chenoa does not do the cobra to Jesulín / Spain News