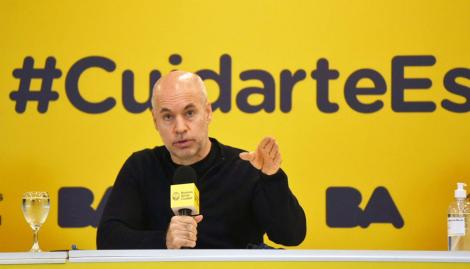 The head of the Buenos Aires Government, Horacio Rodríguez Larreta, confirmed this Monday the City’s adherence to the National Protocol for the Comprehensive Care of People with the Right to Legal Termination of Pregnancy, although it announced additional measures, such as a plan for the prevention of unwanted pregnancy and assistance to women during the gestation stage.

In his announcement, Rodríguez Larreta recalled that “on July 16 the Buenos Aires Legislature passed with a large majority (50 votes in favor, three abstentions and seven against) the law of adherence to the national protocol for the Legal Interruption of Pregnancy (ILE) for justified causes “.

And he added: “Respecting that decision, the Executive Power of the City will promote a set of measures to strengthen the prevention of unwanted pregnancy and to provide information and accompaniment options that guarantee full discernment of the choice faced by a pregnant woman. “

Larreta also stated that he will promote institutional conscientious objection: “Reaffirming the commitment to the full validity of the right to freedom of conscience, and recognizing that in the City there are various institutions whose professionals could choose to adhere to said right, I instructed the Ministry of Health to proceed with the creation of a program referral of ILE practices that offer an alternative to the aforementioned institutions, while guaranteeing access to a safe and timely practice for the pregnant person. “

In this way, the Buenos Aires Government decided not to advance in the veto of the law, as “pro-life” organizations have demanded in recent weeks, since the legal deadline to do so expired on Monday; and announced complementary measures to prevent, for example, unwanted pregnancies and speed up the adoption system.

The national protocol established by the Minister of Health, Ginés González García, in December 2019, is based on the grounds established by the Argentine Penal Code since 1921 -and confirmed by the Supreme Court of Justice in 2012-, according to which termination of pregnancy is legal if it comes from rape or represents risks to the life or health of the pregnant woman.

Currently, the provinces of San Juan, Formosa, Tucumán, Santiago del Estero and Corrientes do not have their own protocol or adherence to the national ILE, according to a survey by the National Campaign for Legal, Safe and Free Abortion.

A fish cemetery: they investigate a strange phenomenon in the Montelindo...

Harris and Pence clash in a firm and courteous debate

Sales in May fell in half of supermarkets, with drops of...

The emotional memory of Mirtha Legrand of her son, 21 years...

Airlines “is not going to be what it was”, warned the...