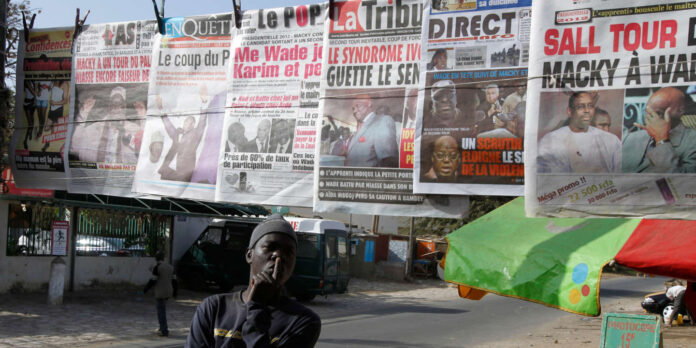 The headquarters of the Senegalese daily The echoes was vandalized on Monday (August 3) by supporters of a Muslim leader and political party leader who criticized his editorial staff for claiming that he had tested positive for the coronavirus, AFP learned from the newspaper. “The material in the newsroom was damaged. These are seven computers and a television set “, explained one of the heads of the Dakar daily, Cheikh Oumar Ndao.

In their Monday edition, The echoes had claimed in “one” that Serigne Moustapha Sy, figure of the influential Muslim brotherhood of the Tidianes and president of the Unity and Rally Party (PUR), had been “Struck down by the Covid-19” and admitted to the main hospital in Dakar. The PUR presented a candidate in the 2019 presidential election: computer scientist and academic Issa Sall, close to the religious movement led by Serigne Moustapha Sy, which won 4% of the vote.

Read also “I was accused of bringing the pandemic to Senegal, a punishment from God for my homosexuality”

In a statement, the national secretary of youth of the PUR, Habib Ndiaye, denounced “Shameless lies” and affirmed that the president of PUR “Is well and is somewhere on planet Earth going about his business.” Denouncing a “Destabilization campaign”, he warns the newspaper: “Leave him alone if you want peace […] Forewarned is forearmed. “ The press release does not mention the attack on the drafting of Echoes.

According to the head of the newspaper interviewed by AFP, “Four to five” attackers arrived at the premises of Echoes around 1 p.m. “They asked for the author of the Moustapha Sy article, made threats and damaged the equipment,” Ndao said, adding that he had been questioned about this incident by the gendarmerie. The Council of Publishers and Distributors of the Press in Senegal (CDEPS) condemned in a press release a “Vile aggression” and reminded the state of its “Duty to protect journalists and media houses”.

Senegal has officially declared 10,386 cases of Covid-19, for 211 deaths. Contaminated people have publicly denounced the “Stigma” of which they were victims, when their disease was known. This predominantly Muslim West African country is listed in 49e place in the Reporters Without Borders (RSF) ranking on press freedom, out of a total of 180 countries.

Coronavirus in Nicaragua: Ortega’s regime once again challenged the pandemic with...

When are we free again?

23-day-old baby died of coronavirus in the Philippines

An agenda to restore the health of the industry

In Mayotte, one dead during clashes between gangs