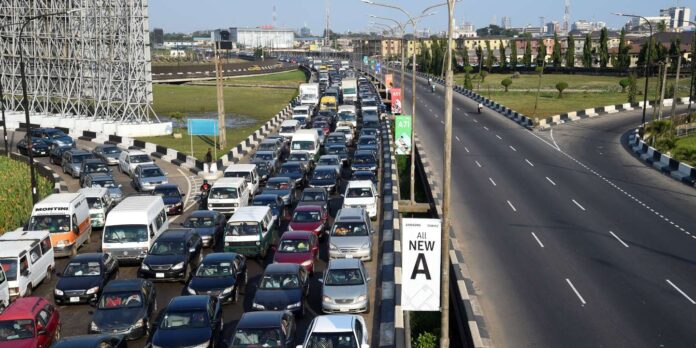 The monster traffic jams in Nigeria’s economic capital Lagos are nothing new. But with the partial closure of the city’s main bridge, getting around it has become hell for its 20 million residents. Morning and evening, during rush hour, the entrance to Third Mainland Bridge turns into a gigantic bottleneck for cars.

Cyril Oyenuga is exhausted. He lifts the small towel stuck in his door to protect his face from the sun. “Yesterday I spent five hours in traffic. It’s too much fatigue. But I have no choice, I have to work “, he blurted out, disillusioned.

The Third Mainland, Africa’s second largest bridge, stretches nearly 12 km above the Lagos Lagoon and was built in 1990 to link the continent, where the majority of the population lives, and the ‘ islands ”, the economic heart of the megalopolis. At the time, Lagos had a population of just 6 million. Now, tens of thousands of vehicles use the bridge every day.

Numerous rumors about its safety and lack of maintenance often scared the Lagossians but had always been denied by the authorities. This year, as traffic is slowed down a bit by the coronavirus crisis, the government announced six-month works and the partial closure of the bridge – alternating between lanes depending on rush hour – to prevent his “Complete collapse”.

“If there was another solution, we would have taken it”, Infrastructure Minister and former Lagos State Governor Babatunde Fashola said in late July. He asked for the ” cooperation “ of users, but all denounce the lack of alternatives or efficient public transport. The other two bridges connecting the “islands” to the mainland are insufficient to absorb the flow of workers who make this journey on a daily basis, especially as one of these two structures is also partially closed for renovation.

Ambitious urban development projects have been launched in recent years in Lagos, but never see the light of day: after years of delay, the construction of an urban tram supposed to relieve congestion on the city’s roads is at a standstill. As for river transport, which remains the most promising alternative to all-road vehicles, its development is complicated by the lack of infrastructure and stammering safety standards aboard maritime shuttles.

Read also “In Lagos, everything is bigger, noisier, more exuberant”

For the immensity of the Lagossians, trapped in traffic for hours a day, the partial closure of Third Mainland is seen as an ordeal. Now, Kayode Lawson takes more than two hours to get to his internship location: a distance he usually covered in around 40 minutes by collective taxi. The trip is also much more expensive for this student. “Prices had already increased because of social distancing rules which limit the number of passengers on buses”, he explains to AFP. According to him, the prices of collective taxis have more than doubled during rush hour.

A loss of 1 billion euros per month

The curfew, still in effect from 10 p.m. in Lagos in an attempt to curb the spread of Covid-19, is an additional challenge for motorists, who can find themselves stranded overnight or subjected to racketeering by police officers. corrupt police. “We have to leave the office even earlier to have a chance to get home on time,” regrets Richard, seated in the front of a minibus chartered by the private company that employs him as a marketing officer.

Nigerian economist Bismarck Rewane said the loss in productivity from the partial shutdown of Third Mainland could amount to more than $ 1 billion per month, in an already gloomy economic environment. Faced with the double challenge of the Covid-19 pandemic and the drastic drop in oil revenues, Nigeria’s economy is expected to contract by at least 3.4% in 2020 according to the International Monetary Fund (IMF), bringing in the countries in recession.

Yet even though the closure of Third Mainland will affect “All sectors of the economy”, it is nonetheless inevitable, according to Bismarck Rewane, for whom “It is better to carry out this project now, when many companies continue to telework, that schools and places of worship are closed and the economy is slowing down, rather than in six months at a really prohibitive cost” .

The 7 must-see works of the New York MET

For the NGO Acted, “humanitarian aid must no longer just heal...

How much of what you pay for fruits and vegetables reaches...