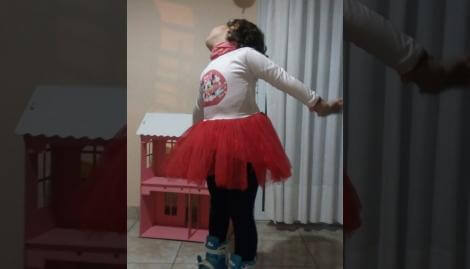 Flor was a year and a half old when she started to put a brush on her head to see her long hair. “At the time, we were funny because we thought he was playing and we didn’t realize what she wanted to tell us“Mariana, the mother tells TN.com.ar.

As the family explains, over time, he continued to wear fabrics on his head, t-shirts that were too long for him as dresses and shoes that he took from his mother. “At two years old she told us she was a baby. We said no to her, because she had a penis and she got very angry, she got sick. ”

Faced with what Florence was saying, the first thing that parents Mariana and Lucas did was go tell the pediatrician. “The doctor explained to us that he was surely fascinated by a woman in the family and that was why he did those things, that if it had been with a man, surely we would not realize it,” recalled Mariana.

Faced with this professional response and the conviction with which their daughter spoke to them about her identity, they had an appointment with a psychologist who recommended that they forbid her to use her mother’s makeup and clothes. “We had to tell her that cosmetics were harmful to her health and encourage her to play with ‘baby stuff.’ He asked us to we repressed so he wouldn’t wear women’s things. She figured it out with a pillowcase or any fabric that simulated a dress and the shakers she wore like long hair. ”

Finally, the family found Flor’s current psychologist who, after several interviews, gave them their refund. ”She told us that we were in the presence of a trans girl. I could not believe it. I did not know the subject and it was very difficult at first. I did not accept reality which was more than evident, because his evidence showed it, ”says Lucas, who acknowledges that, after several more sessions, he reported on trans childhoods and self-perceived gender identities and accepted it.

“Today I defend to the death his identity and the courage he has at five years to express what he feels,” says the father.

With the princess dress for everywhere

For Christmas last year, the girl asked for Elsa’s costume of Frozen And from that moment on, he didn’t take it out anymore. “One day we were going to the spa and Mariana wanted him to wear something else because when he always used it, it was dirty. She did not want to go with other clothes and it was the first time she questioned the lack baby clothes ”.

Another of the situations, which by that time had become daily, was that when Florence came from the street, she stayed in underwear or put on a dress-like shirt. “He had a need to take off ‘his male costume,'” says the mom.

Not knowing how to act against this request from her daughter and not to influence her, Mariana spoke with a mother of a trans boy from Entre Ríos who recommended that they go to a business of unisex clothing and let her choose what she wanted to wear. “That day, Flor he chose his clothes and left the store dressed as she wished. I brought the one I had put in a bag earlier. Since then never wanted to wear men’s clothing again”

Flower for the family and for everyone

“One day he told us that his name was Florence and he made it known to everyone. “On one occasion he asked the paternal grandfather on the phone and said ‘from now on, my name is Flor.'”

A key moment that the family remembers was when they had to go to the guard of the municipal hospital. “Flor was already wearing baby clothes and I asked them to change the name of her clinic history but the answer was that he had to have the DNI rectified, which it is not true According to the Gender Identity Law, I had to say the name that was on her document and she got sick and repeated that it was Florence. For this reason, and to avoid having to go through this type of situation again, we decided to rectify the documents. ”

As explained to TN.com.ar, Facundo Achaga, the lawyer who accompanied the family to carry out the procedures in the Civil Registry of Azul: “The law provides for the possibility of changing the document, but in addition to that, demands that each one addresses the other according to the self-perceived gender, without prejudice to what your ID says. “

In addition, the lawyer indicates that the law oblige to all the public institutions to give a decent treatment and that implies recognizing your own identity, the self-perceived “.

A document that matches the identity

Through the psychologist Valeria Paván, Mariana contacted Iñaki Regueiro De Giacomini, advisory lawyer for the Undersecretariat for Gender Policies and Sexual Diversity in the province of Buenos Aires. “I explained to her that we wanted to start the process because when we went to different institutions, she had to explain what was happening and many times, she was in front of her and it was traumatic for Flor“

According to Regueiro De Giacomini account, the situation that the family lived in the hospital is contemplated in the Law 26,743, in article 12 in which the dignified treatment. “We treated him with the corresponding diversity area and in a short time they called the mother from the institution and had a conversation to clarify how they were going to refer to the girl from then on.”

The lawyer from the Ministry of Women, Gender Policies and Sexual Diversity of the province of Buenos Aires clarifies that the approach was comprehensive: “Attentive to the systematic and historical violation of human rights suffered by the trans community and trans children, all are addressed the issues: health, education, registration, etc “.

Regarding the desire of the trans girl and the accompaniment of the family to make the registry rectification, Regueiro Di Giacomini affirms: “To make the modification of the data consigned in the birth certificate and all the documentation that is issued from that, We contacted the Civil Registry of the province of Buenos Aires to manage the shift, and we spoke with the delegate of that agency. Fortunately, Azul was in phase four of the quarantine and this was an authorized activity. “

On the other hand, and as required by law, they managed the accompaniment of the girl’s lawyer, Facundo Achaga, who freely participated in the process.

Achaga had an interview with Flor, her mom and dad where she tried to approach the girl from the playful to know her self-perception. “I asked him to draw himself and he did it like a baby. She also assured that this is how she wanted to be called. We talked about the DNI, I asked him what name and what photo he wanted him to have and he told me that according to his current image. Her will was fully defined when she interviewed me. “

The identity reflected in the document

On Thursday, July 23, they carried out the procedure. “The law calls it Starting rectification. The truth is that the game is not rectified but is canceled and make a new one. It is practically a new birth. Once it is finished and replaced by the new one with the genre according to Flor’s self-perception and her new name, the new DNI is made. “

Before finishing the interview, Achaga warns that although there is an antecedent of a teenage boy who made the registry change in Azul, Flor’s is that of the youngest girl. “He is only 5 years old but an unwavering will and an absolute decision”he assured.

The gondolas law comes into force: what “surprises” it brings / Argentina News

Uncertain CDMX entry to the new reality posed by COVID-19

How is Signal, the app chosen by those who leave WhatsApp ...

Jorge Vélez ceases to be the president of the Major Division...

Telenoche | The reunion of volunteers and a boy who celebrated...

These 7 indicators anticipated the drop in dotcoms / Argentina News