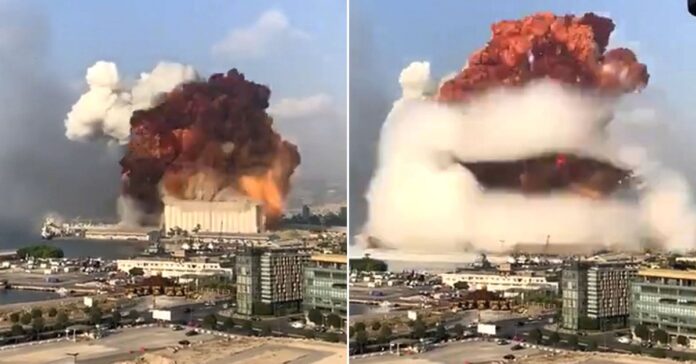 A strong explosion shook the Lebanese capital on Tuesday, on which a large column of reddish smoke rises, which originated in an explosives warehouse in the port of Beirut, reported the National News Agency (ANN).

According to the state agency, a fire started near the port’s wheat silos, in an explosives warehouse, which caused a strong deflagration that could be felt throughout the city and its suburbs. A gigantic mushroom cloud was visible several kilometers away.

The preliminary report of the authorities speaks of dozens of wounded, without giving more details. Reporters at the scene report bloodied people and others trapped under the rubble.

Residents reported broken windows and falling precarious roofs, even in neighborhoods far from the site. An agency photographer AP near the port, he witnessed people injured on the ground and widespread destruction in central Beirut.

As the smoke from the fire was visible from a distance, several people from numerous points in the capital were recording the scene when the explosion occurred, in videos that were quickly shared on social networks.

Damaged cars nearby were abandoned on the street with inflated airbags. “The buildings are shaking,” one resident tweeted, while another wrote: “A huge, deafening explosion just engulfed Beirut. I heard it from miles away. “

The explosions came at a time when Lebanon is experiencing its worst economic crisis in decades, which has left almost half the population in poverty.

Lebanon’s economy has collapsed in recent months, with the fall of the local currency against the dollar, the massive closure of businesses and the increase in poverty at the same alarming rate as unemployment.

(With information from EFE, AP and AFP)

EUROPEAN STOCK EXCHANGES seek to recover on another day of volatility

At the end of his term, what court cases threaten Donald...

Black Thursday in the markets: Wall Street, the stock markets of...

choose an image and see what it says about you

Coronavirus in Argentina | From Monday it will be compulsory the...