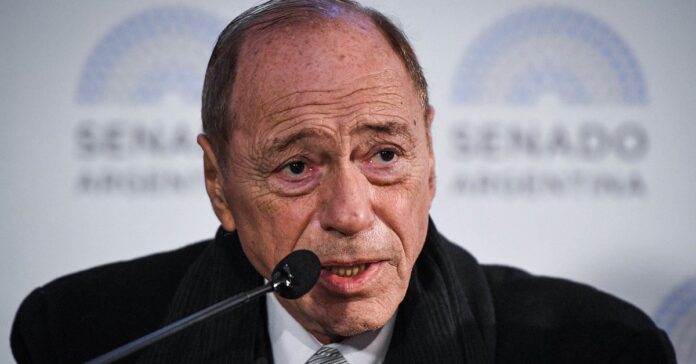 Eugenio Raúl Zaffaroni warned of a post-pandemic crisis scenario for Argentina highlighted by the increased poverty and insecurity, in which he considered that a new model of the State will have to be rethought and with this he justified the “need” to write a new National Constitution. The argument of the former judge of the Supreme Court of Justice is not only social, it is also political and he took the opportunity to point against Mauricio Macri: “We cannot have a Constitution that one day allows a man who wins an election by one vote to indebt the country in billions of dollars that enter on one side and go to tax shelters on the other.”

By videoconference, Zaffaroni participated in the Cycle of Digital Talks who organized the grouping Populism K. There he remarked that to propose the discussion of a new Magna Carta requires political opportunity and need: “The need exists, the political opportunity is notIt depends on multiple circumstances, especially with this pandemic. No evil is eternal, but you have to see what world we came out of, with what society, with what new needs … “, he declared, thinking of the country that will remain after the COVID-19 pandemic.

“They are going to increase the levels of poverty, it is going to be necessary to elaborate a project of State; it is not enough for us with the 1949 Constitution, we need something more ”, expressed the member of the Inter-American Court of Human Rights. “From every crisis of this nature a State model emerges; The New Deal came out of the one in 1929 and a new State model is going to come out of here. It is essential, a new Constitution is inevitable ”he emphasized.

Zaffaroni differentiated these “new reasons” to modify the Constitution of the “Old reasons”. In this sense, without mentioning it, he charged Mauricio Macri: “We cannot have a Constitution that allows one day, a man who wins an election by one vote, indebted the country in billions of dollars that enter on one hand and go to tax shelters on the other. It cannot be, it is compromising the GDP, the work, the added value, for decades, because a man won an election by one vote. Something is wrong there. “

Asked about the increase in insecurity and the demand of the “strong hand” society, he stated: “It will flare up in the coming months.” “If we respond to universal rules, a crisis like the one this disaster is going to produce (the pandemic) always increases property crimes. It is unavoidable”.

This Monday, the Minister of National Security, Sabina Frederic considered that “there are not many robberies” that are happening and that it is the media that “makes them visible”. Along these lines, Zaffaroni charged against journalism and declared that in addition to insecurity, “social communicators, opinion-formers, are going to flare up, all those beasts that appear instigating revenge ”.

After the outburst, the former Minister of the Supreme Court analyzed: “If you go to prison, you find it full of the poor, what is it due to? it is because our highly stratified societies have different levels of training, that is to say in a villa you don’t learn to make a society off shore or to evade taxes and the one who by his social class learns to do that does not know how to take out the wallet of the one who goes next to him in the bus.

In his eyes, Zaffaroni understands that “it is always the easiest thing to do”: “Finding a stupid thief dressed in the street, carrying stereotypes, a stereotype walking that steals and does rude things, that has no social power, no there is no problem in putting him in jail. ”

“The penal system is structurally selective, but not only to criminalize, it is also selective to victimize. The poorer you are in society, the greater the risk of criminalization and the greater the risk of victimization, because you cannot afford private security, because you live in vulnerable housing, in a more violent neighborhood … one wonders Is it against them that this discriminatory punitive power is exercised and yet they ask for it?, they ask for it because they are more victimized; In one of these, you will find it less permeable to heavy-handed discourse in certain middle-class sectors because they are not victimized. He who experiences victimization has a barbarous anger, it is natural and there is nothing to do ”he continued.

Zaffaroni defined the heavy-handed claim as a “Populace campaign of revenge” that it “catches” in certain sectors of the citizenry and that the result is: “overcrowded prisons” where there is more risk “of infections, diseases, violence”. “But when the prison is very overcrowded, the prison guards lose the internal control that remains in the hands of a gang that subjects prisoners to conditions of humiliation, of servitude -sometimes sexual servitude-.”

“You put a guy in there and what do you get? Someone with a huge degree of social resentment, someone much more deteriorated than when he entered, you get him with a certificate of incapacity for work because nobody hires a guy who was imprisoned. The real effect is of crime reproduction ”, he pointed against the prison service.

He also referred to the “Ideology of re-socialization”: “You cannot say to the porro chorro ‘be nice’ because he is going to tell you, ‘why am I going to be nice if there are others who are such a child and are loose’, and he is right. You have to tell him, ‘don’t be stupid. ‘ That’s the thing, trying to redefine your subjectivity of ‘I am the piola because I come out of iron.’ Well don’t be stupid because they are going to shit you on the corner, you are going to end up in a ditch, “he concluded.

Sabina Frederic: “There are not many thefts, the media make them visible”

The conurbano, red hot by insecurity: the most complicated areas and the crimes that increased

“The country as an inexhaustible picnic area”

They promote a modification in the Civil Code to allow pregnancy...

This is how the first coins and bills with Maradona’s face...

What is happening to the dollar and how it can impact...

Business alert for the K turn of the Government to finance...