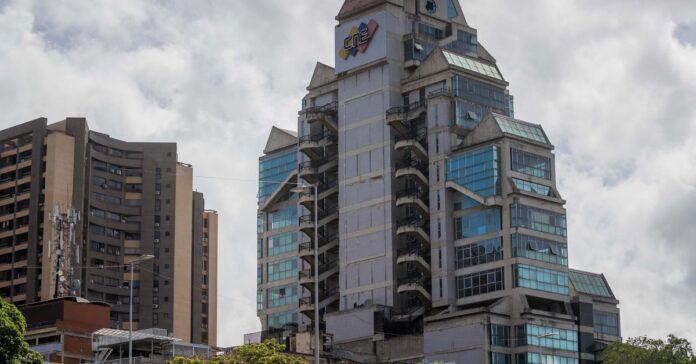 Caracas, Aug 3 (EFE) .- The Venezuelan opposition reiterated this Monday that it will not appear in the elections to renew the National Assembly (AN, Parliament) of the coming December 6, a decision that leaves the way open for Chavismo to resume control of this body, which since 2015 has been in the hands of opponents.
“We want to choose, but these are not elections. Under these conditions it is impossible. Venezuelans cannot go to that electoral theater,” deputy Nora Bracho, of the center-left party Un Nuevo Tiempo, said this Monday, referring to various irregularities that the opposition complaint have vitiated the call.
Bracho’s words were, at the same time, a reiteration of the opposition decision after yesterday, 27 anti-Chavista political organizations had advanced in a statement that they will not attend the legislative elections, considering that they will not be free and competitive and, therefore, ” a fraud”.
“It is a disrespect (…), we continue fighting for truly free elections,” Bracho said today.
The decision announced this past Sunday was supported almost immediately by the leader Juan Guaidó, who chairs one of the two directives that claim to control the Chamber and whom almost 60 countries recognize as interim president.
“We reject the farce, now we must mobilize that majority who want to live with dignity,” Guaidó said on Sunday on his Twitter account.
The opposition’s decision is reminiscent of the one it already made in 2005, when it did not appear before the parliamentarians of that year and left Chavismo in full control of the camera.
On that occasion, the government of the then President Hugo Chávez (1999-2013) hardly faced international criticism, while the opposition saw its influence among voters dilute for years.
THE OPPOSITION SAYS THERE ARE NO CONDITIONS
The Venezuelan opposition has said for more than five years that there are no conditions in the country to go to free and competitive elections, although it widely won the 2015 legislative elections.
Opponents often point out, in other complaints, that the National Electoral Council (CNE) is not impartial, the alleged advantage of Chavismo and government obstacles to its parties.
In response, the Government of Nicolás Maduro negotiated with some opposition parties, with little militancy and without control of political spaces, a partial renewal of the CNE that was carried out by the Supreme Court instead of Parliament, which led to the rejection of the bulk of the opposition .
And later, the Supreme Court itself issued sentences that left the main opposition leaders without the control of their organizations, as happened with the party of Leopoldo López, Voluntad Popular (VP), or that of the two-time presidential candidate Henrique Capriles, Primero Justice.
In this sense, the deputy of the social democratic party AD -whose current directive was also appointed by the Supreme-, Carlos Prosperi, said today that the opposition organizations were “kidnapped” by the Maduro government.
“The cards of the parties that represent Venezuelans will not participate in this farce,” he insisted.
CHAVISMO DEFENDS “IMPECCABLE CHOICES”
Although the opposition’s decision was expected, Chavismo has not reacted immediately, although President Maduro defended this same day in a virtual meeting of the ruling United Socialist Party of Venezuela that the elections will be “impeccable.”
“Opposition parties are going to participate, emerging leadership of the opposition,” added the president during the meeting of his political organization, which was broadcast on public television VTV.
In the past, the opposition has said that these types of acts constitute an unacceptable official advantage, without Chavismo taking note or even reacting to these criticisms.
Anti-Chavism, through Guaidó, has also warned that holding the elections under the current conditions will bring more signs to the Maduro government, and that surely the fifty countries that do not recognize him as president do not recognize the results of the parliamentarians either.
Given this possibility, Maduro promised last week that these elections will be fair and will have an “open door” to international accompaniment.
The Venezuelan opposition often requests that all the country’s elections have observation of electoral missions, such as the traditional ones of the Organization of American States or the European Union, and not international accompaniment, pointing out that the first figure has greater capacity to detect and denounce irregularities in elections to the world.
But the regulation of the electoral process law in force in Venezuela establishes that only individuals, organizations or local parties can act as observers, although it does not make clear the difference in powers between this figure and that of the companion.

What is the price of the BLUE DOLLAR TODAY, Wednesday July...

The neuroprosthesis so that the blind can perceive shapes / Argentina...

“If there is no agreement, we will resume the IMF program”

power back to the wall over abortion

Phasellus, the consultancy born with the pandemic demand