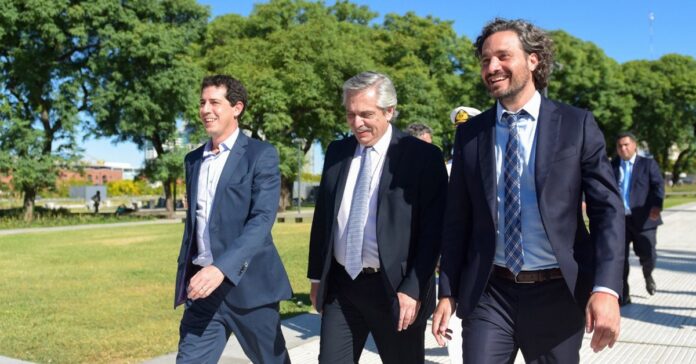 The Casa Rosada is almost deserted by the pandemic. Only three of the most powerful officials in the government go every day. One is the head of the Cabinet, Santiago Cafiero, the only one who lives on the first floor and who has the office next to the President’s. In recent weeks there have been rumors about his eventual departure. Alberto Fernández maintains his trust with Cafiero intact, according to sources close to the President. And the head of the Cabinet accumulates power in a position that many want and is becoming increasingly entrenched at the small table of power.

In one of the meetings they have alone in the fifth presidential in Olivos, Santiago Cafiero joked with the President about the rumors. “Alberto shits with laughter,” Cafiero said in the last hours, as Infobae told the source who knows him best.

In recent weeks, that version has circulated, like that of some other cabinet changes in the midst of the pandemic crisis. There are no changes in the first line of the Government, at least for now, according to different sources that access Olivos consulted by Infobae. “There is no change of Cabinet in the near future. We are all busy in the pandemic ”, is the phrase in which the sources consulted coincide.

“The President puts you in this position because he trusts you. It does not matter what you do. When the President doesn’t trust you anymore, even if you work well, you leave the same ”, affirms Cafiero in the privacy of his office. It is in charge of one of the most important and central issues of the Government: the administration of the pandemic. Everything that is decided is signed in your office.

Before the presidential doctor restricted all activities to the President and instructed him to stay in Olivos, contact with Alberto Fernández was permanent. You only need to open a door to speak to the President. Today the presidential office is locked, there is only one, and there are not even the Grenadiers guarding its door. In addition to Cafiero, the other two key officials who are in the Casa Rosada are the Presidential Legal and Technical Secretary, Vilma Ibarra, and the Interior Minister, Eduardo “Wado” de Pedro, both have an office on the ground floor.

The President and Cafiero meet in Olivos at sunset when Cafiero brings the folders where he has all the items to review with Alberto Fernández, who always receives him in his office.

The other points of power that the Cabinet leadership has are the management of the Budget and the management of funds that, by decree, allow it to reallocate budget items related to the health emergency due to the coronavirus. Furthermore, by decision of the President, he can use funds from the AFI, the Federal Intelligence Agency, for “nutritional, educational and health” policies. The opposition harshly criticized these powers and defined them as “superpowers” that allocate discretionary items by decree.

In the environment of the Chief of Cabinet, they attribute the versions of Cafiero’s departure to some second line of officials more linked to fundamentalist Kirchnerism. But there are no ministers against Cafiero. Alberto Fernández told him many times that when he was the head of the Cabinet of Néstor Kirchner, he had part of the “pinguinera” throwing stones at him, such as former Minister of Infrastructure Julio de Vido. And he explained that he not only resisted but that Kirchner banked him for the confidence he had in him. Later, the departure of Alberto Fernández was a personal decision in the midst of the crisis that sparked resolution 125, the crisis with the countryside, and the “no positive” vote by former Vice President Julio Cobos.

The analysis that they do in private in the environment of the Chief of Staff is that Cafiero, in addition to his relationship of trust with Alberto Fernández, represents a more traditional sector of Peronism. He comes from a cradle, he is one of the grandchildren of the late Antonio Cafiero. And he maintains that in the government’s photo of the “Front of All” that part cannot be missing, nor could the sector that Wado de Pedro represents. Part of the power that Cafiero built, in addition to the presidential confidence is the small table of power.

Every Tuesday at noon, four people arrive in Olivos for lunch with Alberto Fernández: Cafiero, Wado de Pedro, Máximo Kirchner and Sergio Massa. The President discusses with them, defines measures, analyzes political conflicts and management and everything is discussed there. These meetings are not disclosed, they are part of the secrets of power that two of the attendees told Infobae.

Before they were eaten at night and recently they convinced the President to make lunches. They have been done every week for two months, as Infobae learned. Santiago Cafiero’s relationship with Máximo Kirchner also grew and today he is one of the men of power with whom the chief of staff talks all the time. The same does not happen with the mother of the head of the bloc of pro-government deputies. Cafiero has no relationship with Cristina Kirchner. In fact, the first time they had coffee was last Thursday in the office of the vice president in the Senate when the chief of staff went to make the management report in Congress.

It doesn’t have a bad relationship. What’s more, Cafiero was one of those who told Alberto Fernández in 2018 and after the failure with Florencio Randazzo in the intern, that Peronism was not going to be able to beat Mauricio Macri without Cristina Kirchner. The issue with the vice president is that she has a personal relationship with the President. He does not usually speak to ministers. She sends WhatsApp messages to Alberto Fernández but also goes to the fifth presidential in Olivos to eat with him alone. There are no witnesses to these meetings other than the waiters. The President’s partner, Fabiola Yañez, once participated. But the first lady is almost never in those meetings, she has her own agenda linked to the social area.

The other man at the small table is the president of the Chamber of Deputies. Massa, who was in Cafiero’s office when Kirchner was president, is one of those who best understands it. “I was in that chair and everyone wants it. Those who want to hit Santiago I brake. It is not easy to be there, ”Massa said weeks ago, as one of his collaborators in Deputies told Infobae. Massa and Cafiero have known each other for years.

Today power works like this, with this small table. In addition there is the personal relationship that the President has with Cristina Kirchner. One of the issues that Alberto Fernández talks to the small table today is the package of measures that he plans to launch as a post-pandemic plan that does not yet have a launch date. In the last hours, the impact of the launch of the judicial reform and the project sent by the Executive Power to decentralize Federal Justice and unify jurisdictions and chambers, among other issues, were analyzed. It did so without the support of the opposition and with the rejection of the majority of the members of the Court who question the creation of the advisory commission, which is made up of Cristina Kirchner’s lawyer, and which will analyze the functioning of the Court and other organizations. of the judiciary.

“By the time we did, the criticism would have been the same. Alberto made a commitment in the campaign and that is what he is doing, ”said Cafiero in the last hours. The chief of staff advanced in the relationship with the governors. First with Axel Kicillof, with whom he gets along very well. The same happens with the Governor of San Juan, Sergio Uñac, and Juan Manzur de Tucumán, among others.

He talks to government officials and opponents very often. All the authorizations for activities throughout the country that are limited by COVID-19 must go through Cafiero’s office. The governors raise the requests, which are discussed with the Ministry of Health and signed in Cafiero’s office.

Cafiero also has no relationship with the “more Peronists” of Cambiemos such as the deputy head of the Buenos Aires government, Diego Santilli, nor with the head of the Deputies’ bank, Cristian Ritondo. Political relations with the opposition are managed more by Máximo Kirchner and Massa.

Regarding the presidential environment, Cafiero works a lot with Vilma Ibarra, who watches over the signature of the President and each decree that comes out does not come out until she approves it. The official, who is also extremely trusted by the President, is the third inhabitant of the “Casa Rosada pandemica”, as officials tell the Casa Rosada today. Vilma Ibarra also goes to Olivos, but like Cristina, she has a bilateral relationship with the President. Sometimes the secretary for Strategic Affairs, Gustavo Béliz, who has a good relationship with Ibarra but is resisted by Kirchnerism and also reaps some misgivings among some “Albertist” officials, joins.

Cafiero has a moderate profile. He does not like the combative profile and the one that is all the time in the media. “Each head of Cabinet has his style,” describes one of his collaborators. It became a “meme” the day Cafiero was in his shirt during a presidential announcement for the quarantine. The story of that day in which the President announced the extension of the quarantine is that neither he nor Wado de Pedro were expected to be at the conference and Alberto Fernández told them to “come with me.” Cafiero was in his shirt because it was an informal business meeting. Many times now in Olivos they are dressed this way, and also now the announcements are formal with Larreta and Kicillof. Cafiero to go to the Rosada, even when there are not so many encounters, he always goes in a suit.

The day he took office, Alberto Fernández hugged who until that day was his campaign manager and said in his ear: “Laburá with conviction.” Santiago Cafiero always remembers that. “The day Alberto wants, I will have to go. You are not in this position if you do not have the confidence of the President. Meanwhile, I do what Alberto asked me the day I swore and worked, “the chief of staff usually says when someone suggests that they want to change him.

His position is key in power. And the pandemic also made the head of the Cabinet the administrator of the quarantine and of the funds with special powers. The last word is always from the President, but next to him is Cafiero.

In his report in the Chamber of Deputies, Santiago Cafiero pointed out against the opposition: “They have a hate speech that weakens democracy”

She is a nurse, fights against the coronavirus and saved the...

the country tax has already collected the equivalent of 40 thousand...

Motorhome: a business and three new customers that germinated in a...

The scandalous figure that Isa Pantoja has charged for talking about...

Banco Macro opens its doors Saturday and Sunday for payment to...

why inflation of the poor was higher / Argentina News

Dollar today in Honduras: quotation of the lempira to the US...

what did he say about Fabián Gutiérrez

Denard Span announces his retirement “on my principles”