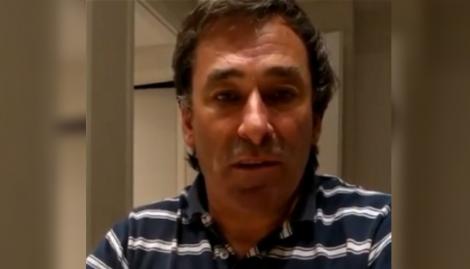 Diego Frutos is the owner of a burned down cabin in Villa Mascardi, Black river. “We’re desperate, We urgently need to be heard, “he claimed. The fire occurred a day after a meeting between the government and representatives of the Mapuche community, who occupy the property that they claim belongs to them. hold responsible because of the damage.

The vandalized property is located on Route 40, 30 kilometers from Bariloche, and is located on a five-hectare site. Frutos assures that the attacks were committed by “people who appear at night in groups, with spears and embedded rags with fuel at the tip. “

He said that “in a few minutes they achieve their mission, which in this case was Steal everything possible from the cabin and then the house fire. “He explained that Saturday’s” is not the first fire “that occurred in the area and that several of his neighbors suffered” the same actions of these vandals. “

Frutos lives in Buenos Aires, and the property in the South is taken care of by a landlord. The fire occurred when the house was unoccupied, since the worker’s wife had to give birth and took her to the town hospital. It was at that time that the fire started that destroyed the property.

The victim said that he and his neighbors are “desperate”, in a video that journalist Mercedes Ninci published in Instagram. Frutos explained that there is a dialogue between officials and the Mapuche community, but that there was no response from the authorities. He called for them to be heard and said they need “urgent help.”

In the Public Prosecutor’s Office in Bariloche, there are several open cases for vandalism and threats in Villa Mascardi, and this case is investigated by the current prosecution.

From the Government of Río Negro they issued a statement expressing their repudiation before “a new violent foray by anonymous groups that they occupy a sector of Villa Mascardi, attacking and trying to usurp private property in the area on this occasion. “

The Minister of Government and Community of Río Negro, Rodrigo Buteler, condemned the new acts of violence and regretted that the actions of these groups and their attacks, that “they destroy with all a joint work that is being carried out with the Nation to try to find a consensual solution to this conflict.

Prior to the burning of the house, the Mapuche community Lafken Winkul Mapu stated in a statement that it extended “territorial control over the bordering territory known as Hueche Ruka, which was in the hands of the Catholic bishopric of San Isidro.” They called to “follow recovering territory without negotiating or trading “and affirmed that their only option is” self-defense and territorial control “.

On Friday there was a meeting between government officials and members of the Mapuche community on the occupied site. The meeting was chaired by the Secretary of Federal Security Articulation Gabriel Fuks, who expressed on Twitter that the meeting was part of the “Alternative Resolution Table of Territorial Conflicts of the Original Peoples”.

Work meeting with Silvia La Ruffa and the heads of the Security forces of #Bariloche, prior to the visit that we will make to different Mapuche communities within the framework of the Alternative Resolution Table of Territorial Conflicts of the Original Peoples. pic.twitter.com/6gzGTdqgZW

Referees from the Ministry of the Environment also participated, who transmitted and signed the commitment of National Parks to withdraw the complaint for “usurpation”, the site reported. In this days. The presentation was made in November 2017 and led to the eviction operation during which members of the Albatros group from the Naval Prefecture assassinated Rafael Nahuel.

The origin of the conflict

The conflict in Villa Mascardi dates back to the end of 2017 when a group of people, who identified themselves as members of the Mapuche community Lof Lafken Winkul Mapu, occupied the lands that they consider to be part of their territory.

Then there was the murder of the young Mapuche Nahuel, on November 25 of that year. He was shot in the back in a procedure by a Albatros de Prefectura Group, who were guarding the property that had been evicted. Since then, acts of violence have taken place in that small town, where about 60 people live.

Taxes: is the stainless zoo hunter back?

DEAD COW: what is fracking?

Flexible quarantine: from this Monday shops in San Luis will reopen

Moving rescue of animals trapped in the snow by the storm...

Suspensions in the private sector and the drop in wages amid...

Ecuador reconnects with soccer after 87 days

Florencia Kirchner claimed a Palestinian activist on Instagram and had her...