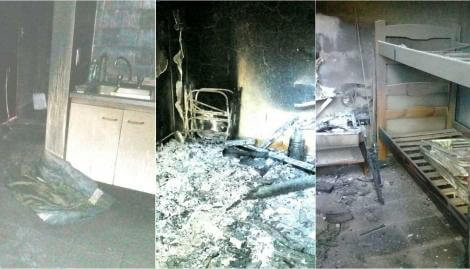 More than three years after the start of the land conflict in Villa Mascardi, and after the neighbors’ complaints about a wave of attacks and destruction for which they blamed the Mapuche community that demands it as their own, on Saturday a man reported that the cabin where he works was set on fire.

The property in question is called ‘La Cristalina’ and is located at kilometer 2006 of national route 40 South. Commissioner José Ocarez reported that the caretaker of the house said that strangers broke in after forcing the shutters and breaking a window, and that once there they set fire to the masonry of one of the rooms, as recorded The Río Negro newspaper.

The fact will be investigated by the prosecution on duty. In the Public Prosecutor’s Office in Bariloche, there are several open cases for vandalism and threats in Villa Mascardi.

From the Government of Río Negro they issued a statement expressing their repudiation before “a new violent foray by anonymous groups that they occupy a sector of Villa Mascardi, attacking and trying to usurp private property in the area on this occasion. “

The Minister of Government and Community of Río Negro, Rodrigo Buteler, condemned the new acts of violence and regretted that the actions of these groups and their attacks, which “ruin with all the joint work being carried out with the Nation to try to find a consensual solution to this conflict.”

“Thus we continue the legacy of our futakecheyem, keeping our conscience clear within the framework of resistance and territorial control until we expel the winka intruder from our territory,” they pointed out from the community through social networks. They also urged “continue to recover territory without negotiating or trading, understanding that the only option is self-defense and territorial control. “

On Friday there was a meeting between national government officials and members of the Mapuche community on the occupied site. The meeting was chaired by the Secretary of Federal Security Articulation Gabriel Fuks and, according to reports, will meet again in 30 to 60 days “to continue the dialogue”.

Fuks expressed in his Twitter account that the meeting was part of the “Alternative Resolution Table of Territorial Conflicts of the Original Peoples”.

Referees from the Ministry of Environment also participated, who transmitted and signed the commitment of National Parks to withdraw the complaint for “usurpation”, presented in November 2017 and that led to the eviction operation during which members of the Albatros group from the Naval Prefecture assassinated Rafael Nahuel. This was reported by the news site In this days.

Work meeting with Silvia La Ruffa and the heads of the Security forces of #Bariloche, prior to the visit that we will make to different Mapuche communities within the framework of the Alternative Resolution Table of Territorial Conflicts of the Original Peoples. pic.twitter.com/6gzGTdqgZW

For his part, the lawyer Virgilio Sánchez explained that members of three Mapuche communities participated in the meeting on Friday. “The Mapuche leaders raised over and over again whatand they vindicate the occupations and they will vindicate and endorse those that occur in the future because they understand that it is an ancestral right that corresponds to them, “he pointed out.

“The meeting began with long presentations by the elders who spoke in full in Mapuzundun and the older leaders. All the interventions revealed the history of the Mapuche people, their suffering and the situation of repression, harassment and deaths of which they are the object, “added the lawyer.

The origin of the conflict

The conflict that occurs in Villa Mascardi is not new, but dates back to the end of 2017 when a group of people, who identified themselves as members of the Mapuche community Lof Lafken Winkul Mapu, occupied the lands that they consider to be part of their territory. .

Then, the murder of the young Mapuche Rafael Nahuel occurred on November 25, 2017, who was shot in the back in a procedure by a group of albatross from the Prefecture, who were guarding the property that had been evicted.

Since then, acts of violence have taken place in that small town where nearly 60 people live permanently.

Coronavirus in Argentina | Classes are back in San Juan: what...

this is how the formula that will be discussed on Tuesday...

Despite the pandemic, demand for specialized jobs continued

Italy votes in referendum on drop in number of parliamentarians

Soccer.- The Minister of Justice joins the congratulations to Cádiz for...

Moody’s warns that the coronavirus will cause nearly double the damage...

Marcelo Toledo, the Argentine recovered from coronavirus: “They are really doing...

City began testing for coronavirus: who is it for / Argentina...