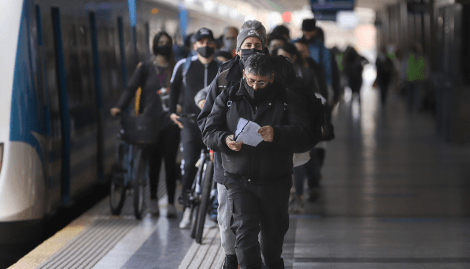 The company Trenes Argentinos decided interrupt the service of the Sarmiento line from 10 in the morning and the measure will last throughout the day. Until now, 14 employees tested positive in coronaviruses and their close contacts should remain isolated, so the company announced that will guarantee only the service of the morning rush hour -between 0 and 10 – with hierarchical staff.

Martín Marinucci, president of Argentine Trains, reported in dialogue with TN that “the service will be restored at zero hours on Tuesday, to guarantee the train service between Once and Moreno until 10 am “.

The authority of the company in charge of the railway service in the AMBA explained: “We are trying to get those who gave negative and staff from other lines can operate in the Train Control Station which is a necessary area. Because without specialized personnel the service cannot work “.

Marinucci revealed that at the moment the result of four more swabs is expected. In front of the last 14 infected, the owner of Argentine Trains assured that there was no failure in the protection scheme. “Positive cases occurred in different shifts. Most have to do more with the dynamics that the virus has been bringing to the AMBA, than with contagions within the company, “he said.

For the moment, the company’s objective is to provide a service from zero hours to 10 a.m., to cover the morning period of greatest demand. But they assure that they are working “against the clock” to restore the afternoon rush hour.

Meanwhile, the Ministry of Transportation of the Nation made available support vehicles at the stations to transfer all passengers on the line that connects Once with Moreno. “The users The buses will be available today at Once and at Liniers, above all, to offer them the possibility of returning to their homes in the western suburbs, “explained Marinucci.

Since the start of the pandemic, on the five railway lines, 449 workers contracted the disease and more than 1600 had to be isolated because they were close contacts of positive cases.

The first case in the railway operator occurred 70 days after the first infected person was known in the country. From that moment, the curve was upward, as in the rest of the AMBA, since employees are included in essential tasks and do not escape contact with the virus, they say from the company.

In addition, Argentine Trains has a 30% of licensed staff for being over 60 years old, having previous illnesses or belonging to a risk group.

Due to the loss of personnel, sensitive areas have been affected, such as the Train Control Station, drivers or guardrails of any of the five lines of the AMBA, since they are specialized personnel indispensable for the circulation of this means of transport.

Faced with any queries, users can contact the toll free line 0800-222-TRAIN (8736) or enter www.argentina.gob.ar/transporte/trenes-argentinos.

Coronavirus: The United States recommended its citizens not to travel to...

Finland rocked by hack of thousands of psychotherapy patient records

The ranking of the most beautiful fish that can inhabit your...

The audiovisual industry of Córdoba makes its first colloquium.

The plans for Argentina in the post-pandemic, on the covers of...

Building has never been so cheap: how long will the opportunity...

Spain, on alert for COVID-19, with the first city confined by...