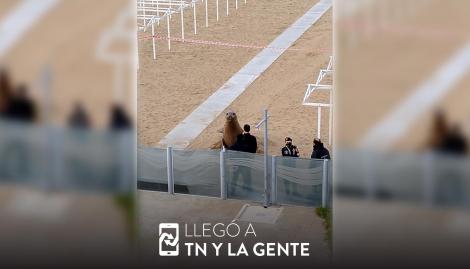 In full quarantine and without tourists, a juvenile male of elephant seal from the south appeared in the Saint Michel spa, in the area of The Pearl of Mar del Plata, and it could be returned to the sea to the amazement of the people of Mar del Plata who walked through the area.

Natalia Martino, biologist dependent on Natural Resources and Park Ranger of the Municipal Entity of Urban Services (Emsur) of the party of General Pueyrredón, told Telam that “a male elephant seal of approximately about 1000 kilos, He left the sea and came to the Saint Michel spa. “

“The animal was in mute (hair change) for what seemed originally sick, but we managed to return it to the sea after several maneuvers and putting an improvised fence, “said the biologist.

Martino stated that “this time of year is where these types of animals are found in their feeding phase in the open sea, prior to reproduction, which begins in the spring. “

He further clarified that “apparently the elephant got lost and ended up stranded on the beach managing to capture the attention of thousands of neighbors. “

The rescue maneuvers were also staff of Civil defense, Firefighters of the police of the Center barracks and the Security unit of the municipality of Mar del Plata.

Coronavirus | The new ones arrested for violating the quarantine: bocce...

How did the phrase “the one who went to Seville lost...

“I respect the opinion of the deniers” / Spain News

A month after the explosion at the port of Beirut, the...

Argentina and Brazil negotiate a 20% reduction for their tariffs /...

The golden age of Deportivo Español, the stone in the shoe...