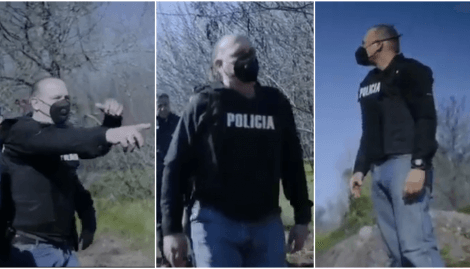 The Buenos Aires Minister of Security Sergio Berni shared this Sunday on Twitter a spot with political campaign format, which he himself stars in, and generated all kinds of conjectures. Axel Kicillof’s Cabinet official was armed, at the head of an operation, with epic music.

After meeting with Buenos Aires mayors due to the wave of insecurity that hit the province of Buenos Aires, the minister went out to defend his management with a cinematographic style production. In this sense, he played with the typical phrase that announces “based on real events” to show how you get involved in operations.

“We invited journalists to participate in an operation with #GrupoHalcon. We captured a gang of drug traffickers on the banks of the Matanza River. We seized weapons, marijuana and money. Working hard for the security of the Province from Buenos Aires, “Berni wrote on Twitter along with the video.

At the beginning of the material, you can see the minister’s interaction with members of the international press. Then, images that are part of the operation of the special operations division of the Buenos Aires Police begin to appear.

“Why to know us they have to see us in action“, warns a written text about the images that show the provincial security minister armed, wearing a bulletproof vest and a chinstrap. The material ends with a shot in which he is seen epically observing a helicopter of the rising force.

The 44-second video has already reached 39 thousand reproductions and reaped more than a thousand “likes”.

This weekend, several Buenos Aires mayors crossed to Berni after he assured in dialogue with CNN Radio: “Crime is returning to its normal rhythm and insecurity will increase”

Faced with this, the communal chief of Lomas de Zamora Martín Insaurralde he replied in an interview with Miter, where he assured: “I do not agree with that, it is necessary to work so that the results are not negative. Our obligation is to work so that crimes go down“

Faced with these questions, the Buenos Aires official asked the 135 mayors that present the Security plan local 2020 before August 15.

The Minister of National Security Sabrina Frederic, with whom Berni does not have a good relationship, had highlighted in an interview with Jorge Fontevecchia the media profile of his Buenos Aires peer and his “electoral end”.

“He has a political aspiration in addition to trajectory, “said the woman in charge of national security, adding that her counterpart from Buenos Aires” moves in the world of the media to achieve that goal. “

Faced with this observation, the Buenos Aires Minister of Security responded this Saturday in radio statements: “What is a high exposure? I appear in the media because it is an obligation, Government acts must be communicated. Also, I work on the street, they see me arresting criminals, I did not go with criminals to a television studio. The cameras are where I work. “

A construction family whose tradition is to innovate

how will the control and blocking of the SUBE be

The possible DNU to declare health resources “of public interest”, on...

Earthquake in Mexico: an elevator fell in Tlatelolco and people are...