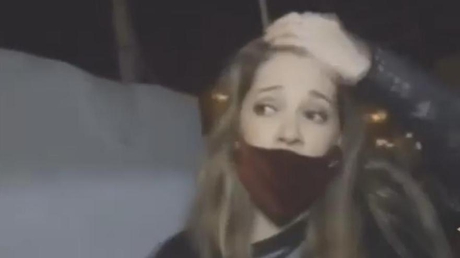 Flavia Fochesato is a young journalist who works as a mobile operator on the Despertate TV program, which is broadcast by Telefe Córdoba. In the early morning the reporter was making a live note from a bus in the city when her cell phone was taken from her.

This moment of insecurity that the journalist experienced occurred very early, when she was covering the new system of bus routes, which works as an emergency plan for the coronavirus pandemic that we are experiencing, in the Los Cerveceros neighborhood. While Flavia was talking to a driver on line 25 on Ricchieri and Camino San Carlos streets, in that neighborhood, a thief took advantage and snatched his cell phone. The subject ran away very fast.

The moment she realized it, the journalist said: “Boys, boys, she stole my cell phone!”, And she decided to run off to look for the thief, while the camera followed her. From the study they clarify that this is happening live, that they stole the cell phone from their partner and regret what happened.

One of his colleagues, Diego Robledo, used his social networks to tell that: “It is an iPhone, it does not help them and she uses it to work.” However, after 8:30 on Monday, the police arrested the alleged thief of Flavia Fochesato’s cell phone and the mobile phone recovered the device, according to Robledo himself.

She is 20 years old, she stopped designing bikinis to make...

“What is the European Union doing to prevent the collapse of...

The amazing photos of fireworks for the celebration of American independence

prices for “elevator” and wages for “staircase” / Argentina News

Coronavirus | Sergio Berni, in “Telenoche”: “You have to have a...

Algerian diaspora find it hard to believe in promise of ‘new...

How much longer will the WHO pandemic last?