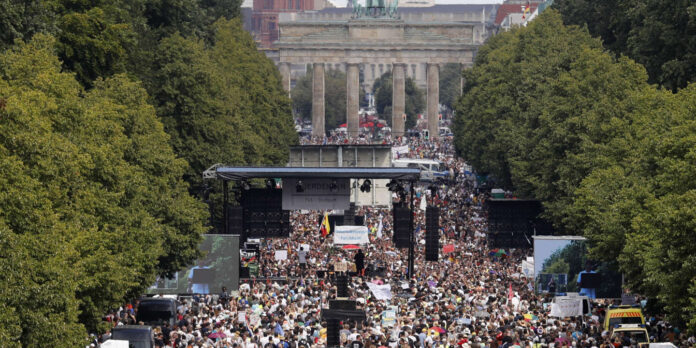 The organizers had trumpeted that there would be 500,000. In the end, the police estimated at around 17,000 the number of people who demonstrated in Berlin on Saturday 1er August, against the restrictive measures imposed in the fight against Covid-19.

In Germany, gatherings of this kind had already taken place in April and May, notably in Stuttgart, the epicenter of the protest. But at the time, the country was beginning its deconfinement and the protesters were only pushing for the acceleration of a process already underway. Today the context is radically different. Since July 20, the contaminations curve has again risen sharply across the Rhine. As of Friday, July 31, 955 cases were registered there in a single day. Such a figure had not been reached since May 9.

These indicators did not deter those who marched in Berlin on Saturday. While the government recently claimed that “The danger of a second wave is real”, the demonstrators hijacked the expression by chanting repeatedly: “We are the second wave” – implied that of the defense of freedoms.

Their arguments are the same as in the spring: convinced that the virus is “No more dangerous than that of the flu”, they continue to think that this is only a pretext used by the government to implement a policy of liberticide. “The GDR is back”, “Freedom is the first security”, “Yes to the duty to think freely, no to the duty to wear a mask”, could we read on Saturday on several posters, many of which also contained “anti-vaccine” messages.

As in previous years, the far right was well represented at this demonstration. Explicitly, through the symbols of neo-Nazi groups printed on certain T-shirts or the black-white-red flags – those of the German Reich – waved here and there. Or in a more roundabout way by the organizers themselves, a collective of “Free-thinkers” based in Stuttgart and whose slogan on Saturday was: “End of the pandemic. Freedom Day ”. The connotation was noted by several media which, before the event, recalled that Freedom day is the title given by director Leni Riefenstahl to her propaganda film about the Nazi Party Congress held in Nuremberg in 1935 …

You have 50.4% of this article left to read. The rest is for subscribers only.

Up to 40% cheaper: digital auction of real estate in Córdoba,...

so you can cross yourself in church without contracting Covid /...

Arcor will put $ 140 million to support the opening of...

When does it start and who will receive it first /...

what is the sector in the government’s sights / Argentina News

“How am I going to have a partner with the girl,...