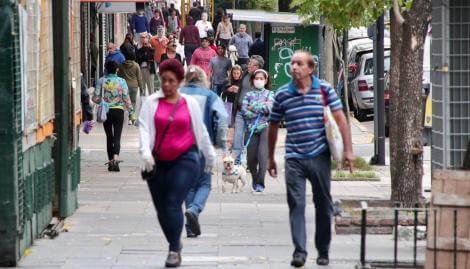 The Buenosairean government confirmed that from this Monday they will be able to open the local shops located on large avenues, except Avellaneda and the transfer centers such as Retiro, Once, Constitución and Liniers.

Horacio Rodríguez Larreta’s objective is to advance the reactivation of a good part of the commercial area after more than four months of mandatory quarantine. Meanwhile, in parallel, the national government announced that social gatherings are prohibited across the country for 15 days, as a measure to control outbreaks in different districts.

In the City, for its part, from this Monday the local retail stores in avenues, including items of clothing and footwear.

Thus the activity is resumed

– Córdoba Avenue, between Lavalleja and Thames.

– Avenida Santa Fe, between Gurruchaga and Avenida Juan B. Justo.

Who will continue to be excluded

-The Liniers, Retiro and Constitución transfer centers, the Once area and the shops on Avellaneda Avenue.

Starting this Monday, the industries that already have their protocol approved will return and, as the rest of the protocols are accepted, the others will resume their activities. The textile, metal, and lumber industries will be enabled. Too the toy due to the proximity of Children’s Day (August 16th).

What will happen to public transport

Will remain exclusive to essential workers. Larreta clarified that the companies that resume the activity “must be in charge of the mobility of their workers.”

Coronavirus in Argentina | Víctor Giracoy, another social reference from Barrio...

for this the tax forgiveness could fail

The EU failed in the pandemic, but not for money: Lionel...

Rustic spaces and a huge garden, this is the mansion of...