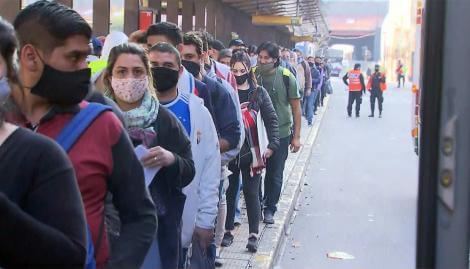 The company Trenes Argentinos announced this Monday morning the suspension of the service of the Sarmiento line from 10:00 to 0:00 on Tuesday. The move, which was decided after 14 cases of coronavirus were detected among staff members, forced passengers to look for other alternatives to return home. In this context, at the station Eleven they saw each other Long lines where the social distancing established during the pandemic was not respected.

The images obtained by TN show to hundreds of people waiting for buses and buses at the terminals of the transfer center. Despite the presence of the security forces, many of the passengers are observed less than a meter and a half away from each other.

In its great majority, is about essential workers, who are exempt from complying with the social, preventive and compulsory isolation that prevails in the district.

“In the morning I caught the train, but now I come here and I find that everything is closed “, expressed a neighbor of Moreno who works in the City of Buenos Aires taking care of boys. “I estimate that it will take me two or three hours to return to my house,” he complained.

Meanwhile, another passenger said that he had been waiting almost an hour, since the collectives cannot cope to transport the large number of people who demand them to return to their homes.

Although the Sarmiento train line guaranteed the service of the morning rush hour – between 0 and 10 – with hierarchical personnel, from then on it reported that does not have personnel to attend Train Control, for which it is unable to continue providing the service. This was due to both the casualties corresponding to workers infected with coronavirus and to those who were preemptively isolated.

Given this situation, the company released a statement in which it recalled that “the Ministry of Transport of the Nation makes available support micros at stations to transfer all users of the line that connects Once with Moreno.”

According to the agency Telam, since the start of the pandemic on the five railway lines 449 workers were infected with coronavirus and more than 1600 had to be isolated because they were close contacts of positive cases.

alert in the market for dollar

3-2. Holland and Franco combine in the Royals’ victory

In Siberia, among supporters of Navalny, the harsh reality of a...

Polo 52 lends to the Province deposits for medical equipment and...

Germany: Calls grow for harder lockdown ahead of Christmas holidays |...

Women’s Atlas reported that a player and a staff member tested...

at the worst moment, a truce for Alberto Fernández