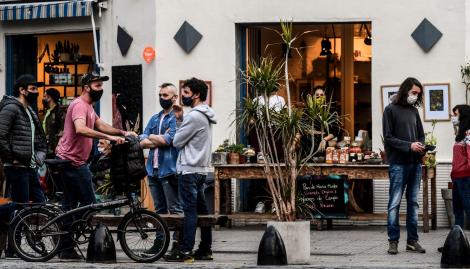 “The origin of the outbreaks of coronavirus they are almost always social gatherings, “explained Ginés González García. The Health Minister defended that the meetings have been suspended again throughout the country, for 15 days, due to increases in cases in provinces where meetings were allowed.

The measure was announced by the Secretary of Access to Health Carla Vizzotti, who explained that the restriction will last until August 16th. The official indicated during the daily report by COVID-19 on Sunday that “the increase in cases is important” in the provinces that went from social, preventive and compulsory isolation to distancing, with greater flexibility of activities than other districts.

González García said that in the meetings are not comply with all the preventive measures, such as a distance of two meters or the use of permanent masks. These factors favor possible contagions of the disease, and the minister recalled that infections usually occur “by air.”

He said that when they started investigating the COVID-19 outbreaks they found that “almost always the origin was a family meeting, or youth, or a guard in a hospital to drink mate. “He indicated that the meetings” have an impact and magnitude “on infections and that is why the president Alberto Fernández “emphasized” social responsibility on Friday, in the announcement of the quarantine extension.

The Health Minister explained that when people are grouped “the risk of contagion is much higher” and that is why they must install the idea of “take care of yourself a little more”, to “not throw overboard all the effort that was put into isolation.” He said that society will have to “fight for a while” against the virus and that for that they must “change various things”, such as avoiding social gatherings.

He assured that the health system “is not overwhelmed, but there is tension” and explained that provinces like Jujuy had to return to the stricter phase of the isolation due to sprouts. “We entered a different stage for some places that are going to have to return to quarantine because they had many cases,” he said in an interview in America.

“The origin of the outbreaks is almost always social gatherings”

He said he is “hopeful” about treatment strategies for the disease. He mentioned treatment with plasma of recovered patients, who he said showed “a lot of positivity” and the equine hyperimmune serum, which he described as “promising” to reverse the virus in the infected person’s body.

The Government again prohibited social gatherings through DNU 641/2020 published in the Official Gazette, signed by the President and all ministers. The measure had been imposed at the beginning of the quarantine, then it was lifted for some provinces and the restriction was finally re-implemented. It will be for the entire country and will last until August 16.

It covers cultural, religious and recreational events, where up to ten people will be allowed. Also “social or family events in closed spaces and in people’s homes, in all cases and regardless of the number of attendees, except for the group living together,” according to the text of the decree.

The DNU that prohibits social gatherings for 15 days

this is how the sector advances despite the pandemic / Argentina...

Without quarantine on the Buenos Aires-La Plata highway: 7 kilometers of...

Coronavirus: 90 infected in the Retiro refuge

how much will be the increase / Argentina News

Tuesday weather: the rains continue, but … how long?

“The Knowledge Economy Law is an engine to get out of...

This is how the manufacturing of Renault Alaskan in Córdoba advances