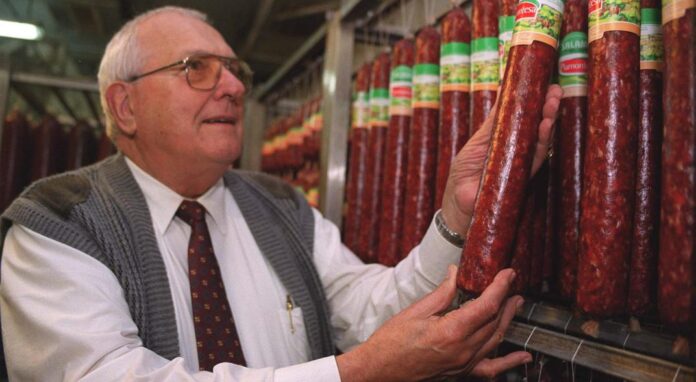 At 91 years of age, Averaldo Santiago Giacosa died on Monday, the businessman who in 1953 founded the company La Piamontesa in Brinkmann, one of the most important meat-packing plants in Córdoba and whose main business is pork meats and pork products.

Married to Ileana Perini, Giacosa had four children: Alberto, Susana, Ana and Daniel. The two men are the ones who currently command the company that became one of the leaders in the pig industry when it acquired part of Campo Austral’s operations in 2019.

“If we, without money and without being any gifted, come to this, as such a rich country is not going to succeed,” he told La Voz in 2001, during an interview in which he related his entire history as an entrepreneur.

ENTREPRENEUR. Averaldo Giacosa in 2001, in a production of photos for an interview with La Voz del Interior. (THE VOICE / File)

“Born entrepreneur and committed to the development of his city,” they valued from the Association of Meat Refrigerators and Industrialists (Afic), an entity of which Giacosa was a director for more than 20 years.

For reasons of public knowledge related to the Covid-19 pandemic, a wake will not be held, but a tribute will be held at the company: “The transfer of the remains to their final residence will stop at the industrial plant at who dedicated all his time and his life. There will be a minute of silence as a tribute and final farewell, “reported from La Piamontesa.

ENTREPRENEUR. Averaldo Giacosa in 2001, in a production of photos for an interview with La Voz del Interior. (THE VOICE / File)

They also asked that those who wanted to send floral offerings, instead make donations to Luz de Vida and / or the La Colmena Workshop, two solidarity organizations of Brinkmann

PRIZE. In 2003, Giacosa received a platelet from Governor Juan Schiaretti. (THE VOICE / File)

Galp plans to finish the Acquavista lagoon this year

The sports firm Asics also announced that it is leaving Argentina

The President defines the extension of the “targeted” quarantine until May...

Less private employment and a reduction in employers, signs of economic...