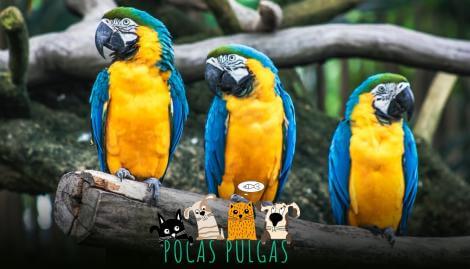 Parrots belong to the Psitaciformes family, which includes more than 350 species of birds, including parakeets, macaws, nymph cockatoos and cockatoos.

There are many types of parrots, but they all have a few things in common, including a curved beak and zygodactyl feet, which means they have four toes on each leg, two of which point forward, and two back.

These curiosities will surely surprise you:

1. It is very difficult to recognize sex.

The males and females of most species look exactly the same, so an expert eye is required to figure out sex.

2. They need a lot of exercise and socialization

Parrots are extremely active birds in the wild, spending countless hours a day flying, foraging for food and staying away from predators. In captivity, their owners need to do what they can to give them as much exercise as they would if they were wild birds. . And in addition to exercise, parrots need a lot of social interaction with their owners in order to thrive in captivity.

3. Some parrots can learn to speak

Although they are very small birds, some parrots they can learn to speak and some develop quite impressive vocabularies for a bird of its size and even learned to sing.

Some, like cockatoos, can move to the sound of music, a capacity that was taken as exclusively human. A San Diego research group demonstrated this thanks to the Snowball Cockatoo, which literally dances to the music.

5. They are the only birds that can eat with their feet

Most parrot species are able to use their feet to carry food to their mouths, much like the way humans use their hands.

The eggs are incubated for 18 to 30 days, while the parents take turns incubating them.
Parrot chicks are born only with a thin layer of fine feathers called down. The chicks are blind in the first two weeks of their lives. At 3 weeks, adult feathers begin to emerge. They reach maturity between 1 and 4 years of age, depending on the species.

Its colorful feathers are equipped with bacteria resistant pigments called psittacofulvins. They are pigments that only parrots produce, they give them colorful tones.

8. Larger species can weigh as much as a domestic cat

The beautiful hyacinth macaw is the longest parrot in the world with almost a meter from beak to tail.

The largest parrot species, for example, macaws and cockatoos, usually live 35 to 50 years. An African gray parrot named Tarbu lived up to 55 years, and, named Cookie, who lived more than 82 years at Chicago’s Brookfield Zoo.

The destruction of their habitat and mascotism are two factors that put them in serious danger. A third of the species are in critical condition and face extinction. Species like the red tailed yaco (Psitacus erithacus), emblematic like few others, were practically decimated in Ghana, with 99% of its population extinct. Many species inhabit remote islands where the introduction of invasive species can mean their doom; others, the longest-lived ones, take a long time to recover due to what they take to reach maturity. Most parrots nest in tree cavities, being the first to suffer deforestation.

Moctar Ouane, a career diplomat to lead the transitional government

“States should be the guarantors of our digital identity”

Humberto Sahade: The concept that we carry with us of innovation...

Prima Implantes adds technology in Córdoba and expands to other provinces