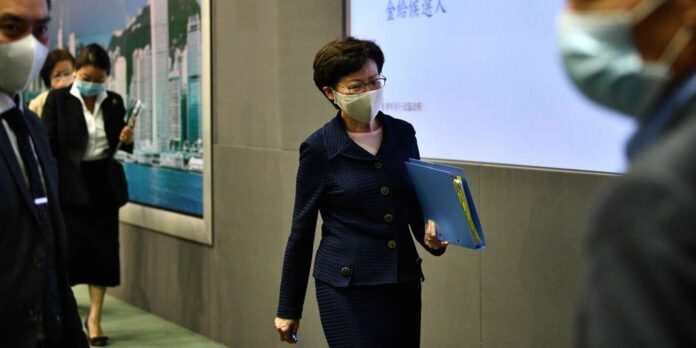 ” Delaying the elections is a very, very difficult decision, but to stem the epidemic and preserve public health while ensuring that the election can take place in an open and transparent manner, this decision is necessary “, Hong Kong Chief Executive Carrie Lam said Friday evening (July 31st), unsurprisingly clarifying that she had made up her mind ” with the Beijing agreement “.

While Basic Law, Hong Kong’s mini-Constitution, provides for the Special Administrative Region’s Legislative Council (LegCo) to be renewed every four years, Carrie Lam invoked an emergency procedure, created in 1922 by the administration. British colonial rule, to impose this decision which plunges Hong Kong into a totally unknown situation.

And it is in Beijing, or more precisely the standing committee of the National People’s Congress, which is meeting in a week, that it will be incumbent on finding the solution to the constitutional vacuum presented by this unprecedented configuration: to govern without Parliament. ” If you ask me for my opinion, I would rely on Chapter 11 of Parliament’s procedures which provides that, for urgent questions, it is possible to recall the outgoing legislature. Parliament could thus extend the length of its own mandate by one year. But that’s only my personal opinion “, commented Mme Lam.

Despite the growing number of rumors about the cancellation of the elections, “Deliberately disseminated to give public opinion the opportunity to digest the information before it becomes official “, According to MP Claudia Mo, Carrie Lam said there was no ” not the slightest political consideration behind this decision “. ” I haven’t looked at the election polls. The only thing that worries me every day is the epidemic. I don’t have time to think about the elections “, she asserted.

The day before, however, the government had cracked a laborious comment welcoming the disqualification of several pro-democracy deputies in the elections. ” Even my friends who are pro-Beijing do not understand the government’s strategy. If their intention is to cancel the ballot, why are they wasting their time disqualifying candidates? “, asks Roger Yun, a young activist.

But citing the record number of recent new cases of Covid-19, and based on a study indicating postponed elections in many other countries, Carrie Lam said that holding the elections presented a “High risk” contamination, due to gatherings and interactions induced by the ballot. Since the beginning of July, Hong Kong has indeed seen a sudden upsurge in daily contamination. They have passed the threshold of 100 new cases per day for more than ten days in a row. Strict social distancing measures were once again imposed, even though the government had to do an about-face this week, forty-eight hours after making the disastrous decision to close all restaurants by only allowing take-out sales. , without providing alternative shelters for the entire working population of Hong Kong who found themselves literally “on the street” at mealtimes.

You have 62.24% of this article to read. The rest is for subscribers only.

With the death of Eduardo Pérez, Córdoba was left without an...

“Quarantine is not lifted, it will change phase”

how the Year of the Ox will affect each sign /...

From extreme precariousness in the House of Representatives, Cori Bush, a...

The trial of “Little Nicolás” is suspended by a Covid contact ...