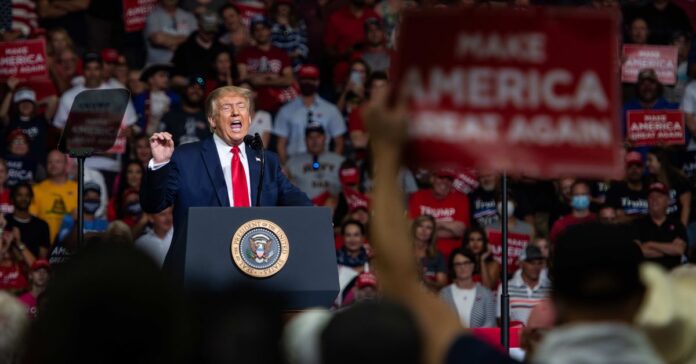 The Republican National Convention to nominate President Donald Trump for a second term in the White House, scheduled for August 24 in the city of Charlotte, will not allow access to the press, as reported by CNN television.

A spokesperson for the convention has indicated that journalists will not be able to go in person to cover the event, which will be partially broadcast via the Internet, in a decision unprecedented in the country’s history blamed on restrictions due to the coronavirus pandemic .

“Given sanitary restrictions and limitations in the state of North Carolina, we are planning that activities in Charlotte will be closed to the press between August 21-24,” this spokesperson told CNN.

“We will be happy to report on whether this changes, but we are working with the parameters presented by the state and local regulations on the number of people who can attend events,” he stressed.

The convention will involve 336 Republican delegates, who will vote on behalf of the nearly 2,500 party delegates. Trump is the only candidate left in the running, so the nomination will mean the official launch of his campaign for a second term in charge of the country.

The president changed the location of the event to the city of Jacksonville, Florida, after the North Carolina governor insisted in May on limiting the number of attendees, although he later reconvened it in Charlotte due to the drastic rebound in cases in Florida.

In the United States, the United States is the country most affected by the pandemic in total numbers, with more than 4.6 million coronavirus cases and 154,449 deaths, according to data compiled by Johns Hopkins University and published through its website.

a life full of excesses and compulsive purchases / Argentina News

It will hire 2,500 employees and pay good wages: star sector

the AFA suspended soccer until March 31

Coronavirus | Operative in a nursing home in Belgrano after a...

Cars or km: for the first time in more than three...

what increases the CGT foresees for this year / Argentina News