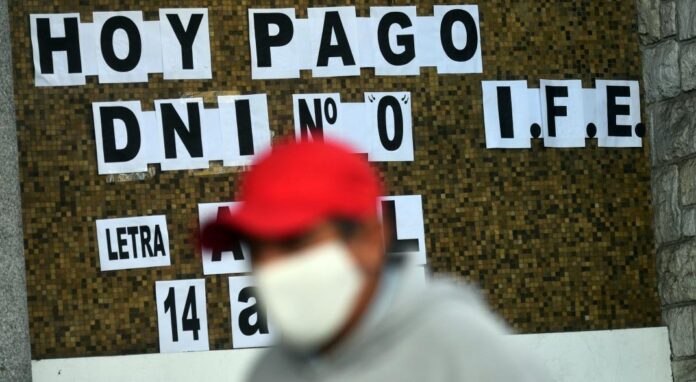 Shortly after encapsulating the country in a quarantine that, in between phases, takes more than 130 days, the national government created the Emergency Family Income (IFE) program. Now he is analyzing converting the aid of 10,000 pesos a month into permanent assistance, in the style of a basic income (the “universal” is pure marketing).

The first official statistic on this benefit (prepared by Anses) has been how to place a porthole in the sea of ​​informality.

Like any database, it helps to dimension some structural phenomena that cross the most vulnerable households and that, just around the corner, have a huge socioeconomic and fiscal impact. But there are also inconsistencies. Let’s see.

Scope. In its exceptional nature, the IFE is perhaps the most comprehensive provision in Argentine history. Across the country, the first settlement was received by 8.86 million people. In the national average, it is equivalent to 44 percent of the economically active population (EAP). The same for Córdoba. But there are provinces in which this relationship is even higher, such as Formosa (80 percent of the PEA), Santiago del Estero (71%), Chaco (68.8%) and Corrientes (65.3%).

At this point, there are striking numbers. For example, the coverage rate in Formosa, always in relation to the EAP, doubles that of Buenos Aires, despite the fact that both provinces have practically the same level of poor households (around 30 percent). Even homelessness by home is almost double in Buenos Aires.

Unipersonal. It does not escape anyone that the number of one-person households has grown, but the census data is old and there is no way to contrast it. Still, the IFE statistics are surprising, and very much so. In the province of Córdoba, for example, in 2001 there were 135,732 one-person households, and in 2010 there were 188,791. That means that, in almost 10 years, there was an increase of 39%. Anses says it settled 346,081 payments in this segment (not counting benefits of the universal child allowance). In other words, it is almost double the total number of households with a person that existed 10 years ago. Either thousands of Cordobans, for whatever reasons, decided to live alone and in vulnerability, or more than one IFE is being paid per household.

Almost 37% of the settlements were for young people between 18 and 24 years old. According to Anses, “the family group may be considered sole proprietorship by affidavit of the applicant” who, if he is under 25 years of age, “must prove a residence address other than that of his parents in order to be assimilated to a sole proprietary family group”.

Financial inclusion. 41% of the beneficiaries chose to collect the money in cash (by Correo Argentino or with a code at an ATM of the Link or Banelco networks), despite the fact that at least 54% of them have a unique bank code (CBU).

Also here is data to follow. Córdoba, for example, is above the national average (it received 44% in cash) and that of Buenos Aires (36%). In Santa Fe, on the other hand, it climbs to 50%. But levels are much lower in poorer provinces, such as Formosa (20%) or Chaco (6%).

Traceability of social assistance is key to reaching those who really need it. Bureaucracy is like a heavy layer full of holes, and all this happens amid solutions that provide the fintechAlthough the government does not seem to trust that universe, it prefers to replicate inefficient and costly practices.

Informality. 62% of the IFE goes to unemployed people or people in informal employment. Among young beneficiaries between 18 and 24 years old, this phenomenon escalates to 72.4%, but even more worrying is that this level is replicated among those between 55 and 65 years old and, therefore, they are close to retiring.

The drama of informality is fragility present and future. So it is no coincidence that the pension system is always on the verge of collapse.

The original text of this article was published on 08/02/2020 in our printed edition.

this is the training of Leo MESSI during QUARANTINE

step by step, how to obtain guarantees to qualify

steps to make a good purchase

The Miter brothers fight over the inheritance left by Bartolomé

WhatsApp Business: how to take advantage of it in shops?