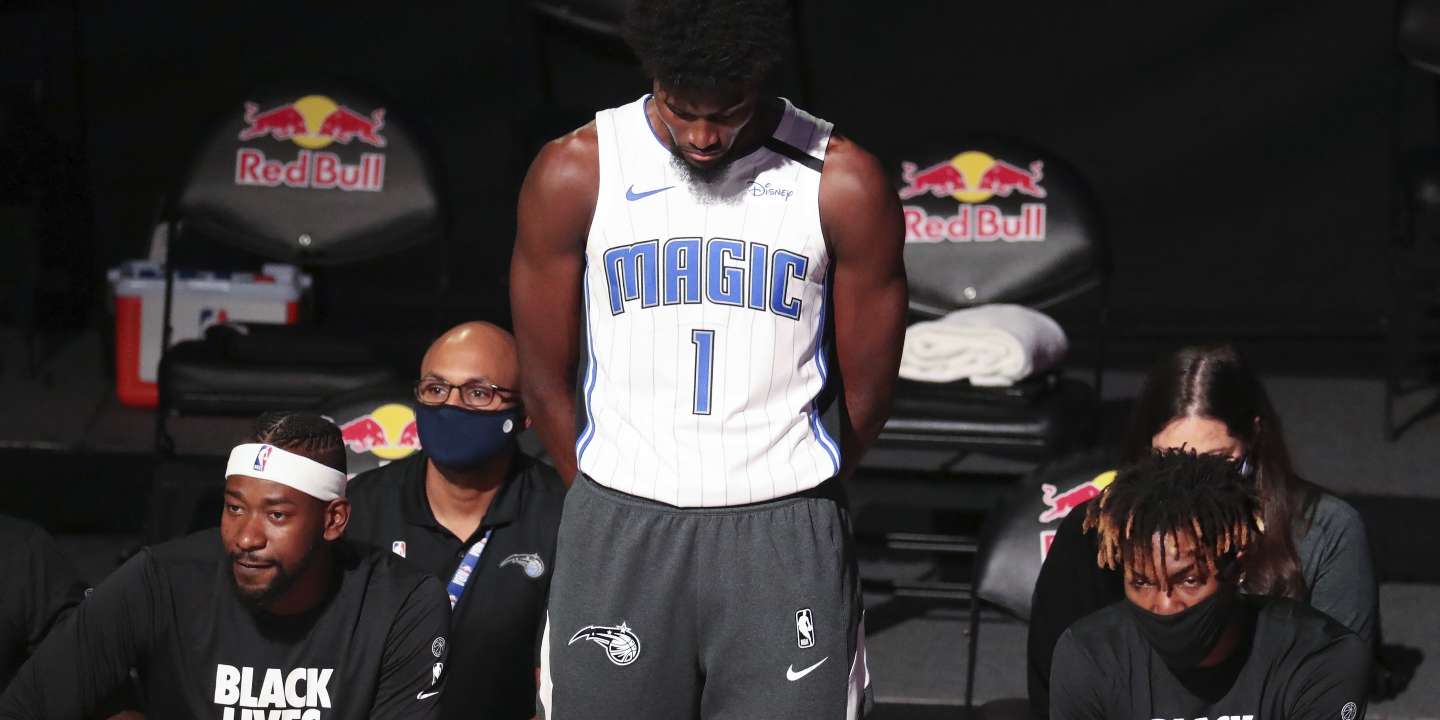 In today’s world, it is often a question of context. Since 2016 and the controversial gesture of American football player Colin Kaepernick, no NBA player has knelt during the American anthem in protest against police violence on the black community, and whoever made the decision to to do would have been at the heart of the discussions.

This Saturday 1er August, on the third day of the resumption of the American basketball championship after more than four months of hiatus, it is, conversely, the players remaining standing who draw attention.

Because, in the meantime, after the death of George Floyd asphyxiated during his arrest by the police in Minneapolis, the Black Lives Matter movement (“Black Lives Count”) has emerged in the eyes of the American population, and the NBA – of which near 80% of players are black – has embarked on a massive campaign to promote social and racial equality.

Article reserved for our subscribers Read also Basketball: a very political recovery for the NBA

Thus, Jonathan Isaac, the Orlando winger, was on Friday the first – two games had been played the day before – not to follow this new collective momentum, raising some questions about this choice. Especially since the Magic player was not wearing the Black Lives Matter support t-shirt either.

The 22-year-old African-American player said after the meeting that he supported “Absolutely” Black Lives Matter:

“Everyone is made in the image of God and we are all far from living up to the glory of God”continued Isaac, a practicing Christian who sometimes preaches in a non-denominational church in Orlando. ” When you look around you, racism is not the only thing that torments our society, which torments our nation, which torments our world “, he continued.

Before concluding : “I find myself in this post, not just on racism, but everything that afflicts our society. I have a feeling our answer to this is the gospel. “

Read also Basketball: players knee to the ground against racism for the resumption of the NBA

Also on Friday, charismatic San Antonio coach Gregg Popovich, whose voice is one of the most influential in the league and who has delivered very strong messages in favor of the Black Lives Matter movement, dressed like everyone else the black t-shirt, but remained standing during the Star Spangled Banner, the American national anthem, as does its assistant Becky Hammon.

Read also Death of George Floyd: what does the knee to the ground mean?

“I prefer to keep this to myself”, replied the 71-year-old technician to a journalist from the ESPN sports channel asking him why he preferred to stand. “Everyone has to make a personal decision. The league has been great about it. Everyone has the freedom to react as they see fit. For all the reasons that are personal to me, I acted as I wanted “, said the man who served five years in the US Air Force, the US Air Force, in the 1970s.

In the United States, the question of respect for the national anthem is often linked to military considerations: opponents or those opposed to the “kneeling” – the fact of kneeling – see in it, in particular, a lack of respect for the forces. American armies.

Article reserved for our subscribers Read also Rudy Gobert in the Orlando NBA “bubble”: “We’re going into a different era”

White Miami player Meyers Leonard on Saturday also opted to stand during the anthem, despite wearing the Black Lives Matter t-shirt, and the word “Equality” (Tie) on the back of his jersey during the match.

“I really support ‘BLM’ and I also love and support the military, my brother and the people who fought for our rights in this country”said the pivot, whose eldest served in Afghanistan with the Marines.

“I am a compassionate human being. I cannot fully understand how our world, literally and figuratively, has turned into black and white “, he added.

” “If you’re not on your knees, you’re not with us,” someone might tell me. This is not true. I will continue with my voice and my actions to show how much I care about everyone. “

No jersey without a name

His team-mate Jimmy Butler had to change his blank registration jersey just before facing Denver, to put on a new one with his name, at the request of the refereeing corps.

While the NBA allowed players to replace their surname with a message of support for the fight against racial and social injustices, the winger had wanted nothing to show and explained himself just before the meeting:

“I approve and respect all the messages the league has chosen, but for me not to carry a message or name is like being who I was before. If I weren’t who I am today, I wouldn’t be any different from any other person of color. “

“I want that to be my message, as an NBA player. Everyone has the same rights, no matter what “, he added. Butler praised the collective momentum that has been building since Thursday to show overwhelming support for Black Lives Matter : “This is what needs to be done. Because this is how we will reach our goal for the greater good. “

Read also Police violence and racism: the American Football Federation allows the knee to the ground

Since the early 1980s, NBA regulations have required standing during the national anthem. But league boss Adam Silver said on Friday there would be no penalty given the current circumstances. The context, always the context …