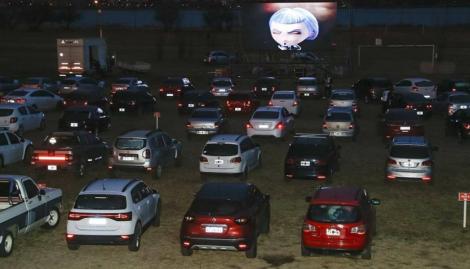 The coronavirus pandemic forced to change the habits and behaviors of people around the world. And the new normality begins to backslide under the motto of “reconvert”, because it is true that nothing will ever be as before. In this context, A classic from the ’70s returned: the drive-in theater.

This modality, which is presented as an alternative to conventional cinemas that they cannot open due to the restrictions imposed by the isolation, it started in Europe, but in the last month it arrived in Argentina, and it is already a rage.

The trend started in the provinces that spent the least time in phase one: San Juan, La Pampa and Catamarca. The arrival of the so-called “intermittent quarantine” at the AMBA allowed the mayors to evaluate new openings and, among other things, to launch this modality.

The last to open was “Drive-in to the River” in the party of San Isidro, which started operating on Friday, and is the first to be enabled in the Buenos Aires Metropolitan Area (AMBA).

The first night, with the emission of Barry Seal, It exceeded the expectations of the organizers: the capacity of the restaurant’s premises on the banks of the Río de la Plata was filled in a few hours.

On the banks of the river, the “room” has capacity for 60 cars. There are three daily functions: 18, 21:30 and 00:30. The screen is mounted on a giant truck and there are two other, smaller ones, on the sides. There are two radio frequencies to tune the film’s audio, a dubbed in Spanish or English for those cars that are nearby and can read the subtitles.

You can enter an hour before the movie begins and, according to the protocol of the San Isidro mayor, the vehicle can only be occupied according to its regulatory capacity. All occupants must wear face masks, even inside the car, and must have gel alcohol available.

Although the San Isidro drive-in cinema is the first to operate in the AMBA, there are already other municipalities that presented similar projects.

In other provinces of Argentina, such as La Pampa, San Juan or Corrientes, that were pioneers, the new way of seeing cinema is already a success, with functions that exceed 300 cars, and various options for adults and children. Also, the case of Carhué, a town in the south of the province of Buenos Aires, where the initiative was very well received by the residents.

While other cities, which are already in Phase 5 of the quarantine, are finalizing details for the opening of their own drive-ins. Such is the case of Tandil, than will have its cycle of “cinema under the stars” from September 21, although the first tests will begin in August.

“The drive-in theater will be located within the most important tourist circuit in the city: Don Bosco. The property, which will have capacity for about 100 cars per function, is surrounded by a street that will be used to organize entry and exit, and the places where the cars should be located will be marked. In addition, the audio will be broadcast through a local FM radio, “explained Alejandro Bonadeo, one of the entrepreneurs working on the proposal that has already been approved by the Tandilense authorities.

Tucumán is also riding a drive-in movie at the Hippodrome of the provincial capital with capacity for 400 cars; while, Mendoza prepare yours in the Plaza Shopping from the town of Guaymallén; and the reopening of the historic drive-in theater is planned El Cerro, in El Challao. The Rioja, for its part, will inaugurate its own in the superdome with a screen eight meters high; and in the province of Buenos Aires, there are other undertakings on file for the districts of Pilar, Mar del Plata and Bahía Blanca.

Thus, the drive-in theater seems to be configured as a new form of recreation within the framework that makes the pandemic possible, where the traditional applause at the end of each function may be replaced by honking horns, signs of lights and beacons as a sign of approval. What is here to stay?