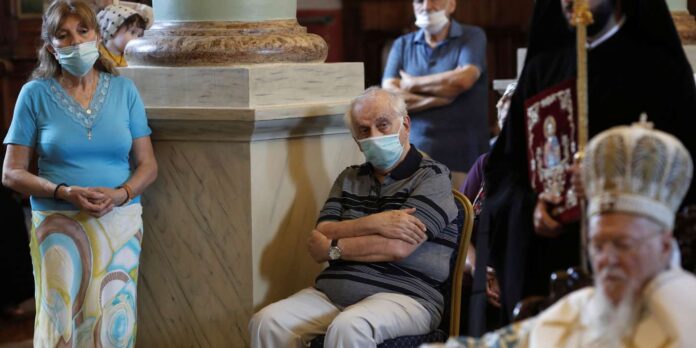 A few worshipers cross themselves in the Church of St. Dimitri on the island of Büyükada, off the coast of Istanbul. On this summer morning, the bitterness is palpable. Two days earlier, the decision fell: Hagia Sophia will become a mosque again. “When I saw that on TV I cried”, slips Vithleem Magoula. At 81, she is one of Istanbul’s last Greek Orthodox, or “Rums,” meaning “Romans,” as the Turks call them in reference to the Eastern Roman Empire.

Article reserved for our subscribers Read also The three lives of Hagia Sophia, jewel of Istanbul, which Erdogan wants to turn into a Muslim place of worship again

Only a handful of Rums, mostly aged, remain today, relics of a centuries-old Hellenic presence. 160,000 people at the start of the 20th centurye century, the Greeks of Istanbul fell to 2,000 members, under the influence of Turkish-Muslim nationalism and the persecution it entailed.

“We are an endangered species, loosely Minas Vasiliadis, 37, editor-in-chief ofApoyevmatini, the last Greek daily printed in Istanbul. When our readers open the newspaper, the first thing they look at is the obituary. And there are more deaths than baptisms. “ According to the elders, Apoyevmatini, founded in 1925, at the time enjoyed a circulation superior to the whole of the Turkish press. To date, it does not exceed 600 prints.

If the Greeks of Istanbul were exempted from the Greek-Turkish population exchange of 1923 established by the Treaty of Lausanne, they nevertheless suffered violent persecution in the decades following the founding of the Turkish Republic. same year. In 1942, for example, non-Muslim minorities in Turkey were subjected to heavy taxes. Everything had to be sold, otherwise you would get to know the forced labor camp. “My grandfather was ruined. We had nothing left “, remembers Vithleem Magoula.

In 1955, in a context of identity tensions in Cyprus, a rumor relayed by the Turkish press claimed that the Greeks bombed the birthplace of the founder of the Turkish Republic, Mustafa Kemal Atatürk, in Thessaloniki. A pogrom then descended on the Rums, as well as the Jews and Armenians. Result: about fifteen dead, a thousand houses and more than 4,000 shops ransacked.

In 1964, 10,000 Greek passport holders were ordered to leave the country, the Turkish state confiscating all of their property. This explains the inevitable exodus of the Greeks from Istanbul. Most went to Greece, others to Australia or Canada. Eleni Kostandinidis, an elegant 80-year-old lady, is the only one in her family to remain. “I had nine brothers and sisters, they all went to Greece”, she regrets.

You have 70.7% of this article left to read. The rest is for subscribers only.

The Spanish demand that the whereabouts of the King Emeritus be...

would not reach companies

from the Tuareg cause to jihadism, the journey of Bah Ag...

Building bleaching advances: these are the benefits / Argentina News