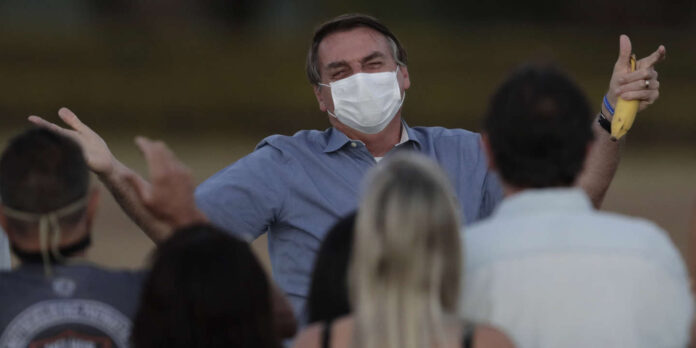 It is in Brazil, in a tense political context, that a new chapter is being played out in the thorny relations maintained by the social network Facebook with the judicial authorities and the fight against false information. The American platform was eventually forced to bow to the Brazilian Supreme Court and block worldwide, as it was asked, the accounts of twelve prominent allies of the president, Jair Bolsonaro, accused of broadcasting infox.

The company complied, however, with regret. Facebook denounces a decision “Extremist” and promises to appeal, saying in a statement:

“This new court ruling is extremist, it poses a threat to freedom of expression and conflicts with laws and jurisdictions around the world. “

This episode comes against the backdrop of growing tensions between the far-right president and the Supreme Court, which is investigating allegations that several members of Mr. Bolsonaro’s entourage are campaigning on social media to discredit this judicial institution and threaten the judges.

Judge Alexandre de Moraes ordered in July the suspension of twelve Facebook accounts and sixteen Twitter accounts, to put an end to “The dissemination of false information, defamatory accusations, threats and crimes” against the Supreme Court. Among the suspended accounts were those of former Conservative MP Roberto Jefferson, business mogul Luciano Hang and far-right activist Sara Winter.

By July 25, the two social networks effectively blocked access to the accounts, but only for Internet users trying to access them from Brazil. The owners of the suspended accounts quickly circumvented the ban by teaching their subscribers how to change their account settings to make them appear to be from a country other than Brazil.

In response, Judge Moraes ordered social media on Thursday, July 30, to apply the suspension to internet users around the world. Faced with Facebook’s refusal, Moraes fined the company 1.9 million reais (around 310,000 euros), coupled with additional daily penalties if the offending accounts were not blocked. He also summoned his leader in Brazil, Conrado Lester.

“Faced with the threat to hold a Facebook Brazil employee criminally responsible, we have no choice but to comply with the ruling by blocking accounts around the world”Facebook wrote. The social network said it would appeal the decision to the Brazilian Supreme Court. Mr. Bolsonaro also announced an appeal to the Federal Supreme Court.

Article reserved for our subscribers Read also Despite the recession and the health crisis, GAFA now weigh $ 4.9 trillion

the city again under curfew, the national guard deployed

Rentals freeze until March 31: what are the risks / Argentina...

From alfajor to a new scale in food

these are the 3 companies that could manufacture it / Argentina...

Earthquakes of regular intensity were registered in Ica and Moquegua |...

The weather for Children’s Day: sunny and cool

Demagogues, digitalization and the threat to democracy | Germany |...