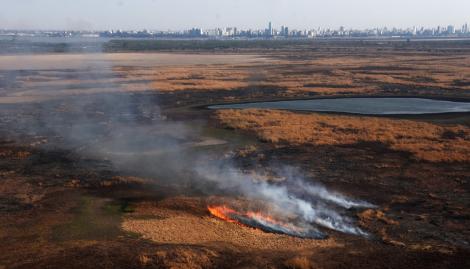 The fire does not cease in the Paraná delta: the intentional burning of grasslands, which started ten days ago, has already caused 90 thousand hectares to be made ashes.

Alberto Suefferheld, director of Fire Management, explained that weather conditions don’t help: “We are experiencing a great drought in the north of the country that affects the Paraná River and the Delta. That adds to the rain deficit. The vegetation is getting drier. That makes the fire run faster“

“By aerial image we consider that 90 thousand hectares have already been burned. The delta has an extension of one million hectares, “compared the specialist.

Consequently, Security Minister Sabina Frederic ordered the Prefecture to send a Albatros team to camp on site and avoid new outbreaks of fires.

However, this task was complicated because, with the advance of the fire, the agents had to work in the fishermen’s housing area to get the flames away from there.

Suefferheld recalled that the provinces of the Paraná delta punish these acts: “Burns in Entre Ríos, Santa Fe and Buenos Aires are not authorized. Justice investigates if they were intentional. “

But, in the meantime, the intentional foci replicate, spread to other areas, and become uncontrollable at times. This week, without planned rains, they will have to redouble their efforts.

Former President Evo Morales returns to Bolivia after a year of...

Lollapalooza Festival in Argentina, Brazil and Chile is postponed to the...

Isolation puts companies on alert for cutting the payment chain

in Iran, exhausted caregivers in the face of a second wave...

At the UN, Emmanuel Macron calls for not being satisfied with...