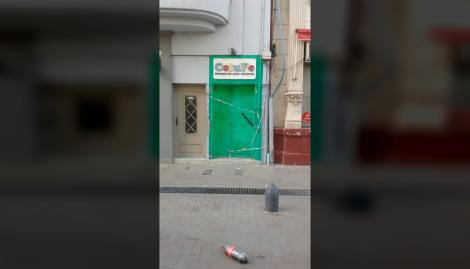 The Santa Fe Police dispersed a clandestine party in which at least 200 people participated in the pedestrian street in the provincial capital.

Authorities detected the meeting at a cell phone local on Calle San Martín at 2800 thanks to the municipal monitoring system.

The uniformed they were surprised at 3 in the morning on Sunday and the first reaction of the young people was to run away from the place.

The one who couldn’t run away was the owner of the businessThe police officers delayed informing him that they would open a case for violating article 205 of the Penal Code for breaking the quarantine.

In the cell phone premises, the small refrigerators with alcohol, the music equipment and even the bicycles were left, as reported by the Ministry of Security of Santa Fe to TN.com.ar.

The prosecutor on duty Ignacio Orio He will try to determine who was at the clandestine party and managed to escape when the police arrived, and also charge them for violating the isolation.

could be applied with emergency approval / Argentina News

why WHO discontinued hydroxychloroquine trials

Trump says the US could be reaching the top of the...

Guzmán was received with applause by members of the Cabinet

“We vigorously oppose any idea of ​​a European directive on minimum...