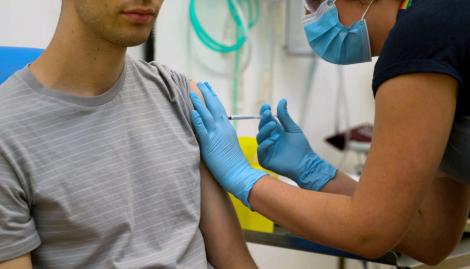 Marcelo Leiciaga is one of the 15,000 volunteers who signed up to receive the experimental coronavirus vaccine being tested in Argentina. It is scheduled for August 18 and, after the first application, it will be monitored twice a week.

“I feel like a guinea pig”, this volunteer firefighter told in laughter in dialogue with TN, who found out that they were recruiting people for this test thanks to the father of a friend who plays rugby with his son at the Club Regatas.

“He passed me a form, I got interested, educated and signed up. After 15 days they contacted me for this test, “summarized Leiciaga, who admitted that this generates anxiety and uncertainty but that”it’s a small contribution to see if it can work. “

When he told his wife and children who had applied, they they supported him. “There are people who are having a very hard time with all this. Even fellow firefighters, one died in a barracks,” Leiciaga revealed in relation to why he decided to put his body to test the vaccine.

Regarding the dose they are going to supply, the volunteer said that “there is no contraindication” and that “it was already tested at the University of Oxford and it worked very well”.

“There is not much information about the vaccine, they make you fill out a form with a series of data. Then they contact you,” explained the firefighter. And he detailed: “You have to be a healthy person, do not have symptoms of COVID-19. “In addition, he added that they are looking for a certain age segment.

Leiciaga also revealed that there is a person who coordinates the test, who is in constant contact with the volunteer, monitors and accompanies him throughout the process. “What they are analyzing is that you generate the antibodies, to see if the vaccine can be effective in Argentina, “he said.

So, the next Tuesday 18 the volunteer must go to the Central Military Hospital, which is the test center in Buenos Aires, to receive the first of the two doses of this experimental vaccine, which is applied to the arm. Then, you will be contacted once to twice a week to approach the antibody test.

In the days following the application, the patient could have a little fever or some urticariaNormal symptoms that can occur after receiving any vaccine.

The start of the test had been announced by the Defense Minister, Agustín Rossi. Last week, he had brought forward the beginning of the trials, which would be jointly between medical personnel from the Military hospital and of Pfizer laboratory.

“I want to clarify that this does not bear any financial revenueWe are simply volunteers, “said Leiciaga.

Finally, this volunteer firefighter, who will put his body to help the world try one of the possible vaccines that will end the pandemic, remarked: “Hopefully all this will turn out well because, as the President says, this Is the only way“

Boeing will further slow its production rates to cope with the...

EU will not send observers to Venezuela’s choice

Robin Söderling revealed the hardest moment of his life: “I got...

The main MILESTONES in the life of JEFF BEZOS

ARANGUREN took stock of the management of Cambiemos: What did he...