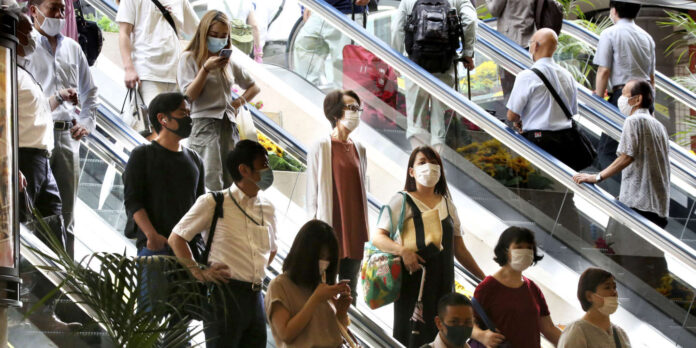 Spared the exponential contagion of Covid-19 that Europe has known and that the United States still knows, Japan has been facing for the past two weeks an alarming increase in the number of people infected. With 437 new cases on July 31, Tokyo is the epicenter of this resumption of contamination (half of the 12,700 people infected in the capital were infected during the month of July). “We have come to the point where declaring a state of emergency for Tokyo becomes the only solution”, said the governor of the capital, Ms. Yuriko Koike. In fact, Saturday 1er August, the Okinawa region decided to restore the state of emergency until August 15.

The state of emergency that gave provincial governors greater regulatory powers was lifted at the end of May. Therefore, they only have persuasion, by inviting the population to respect their directives, to try to stop the contamination. The call for bars and restaurants to close at 10 p.m. from August 3 until the end of the month thus depends on the goodwill of the owner of the establishment.

The Tokyo Municipality has also requested the pachinko (Japanese electric billiard table) to close. In May, a minority of them refused to comply without incurring any sanction other than, in some cases, blacklisting. This was particularly the case in Osaka, where Governor Hirofumi Yoshimura is urging the central government to give local authorities the power to order the closure of establishments that do not comply with contagion prevention provisions.

Article reserved for our subscribers Read also In Japan, new rise in coronavirus cases amid social tensions in hospitals

The deterioration of the situation reopens the debate on the management of the pandemic by the central government whose procrastination and inconsistencies, dictated by its stubbornness to revive the economy at all costs, end up causing confusion and irritation among the population. To his reluctance to declare a state of emergency again and to carry out more screening was added the decision – at least out of time – to launch last week a campaign to promote tourism in the archipelago (for a cost of 1,300 billion yen, about 10.5 billion euros), at the risk of spreading the contagion to regions still little affected. A campaign from which the inhabitants of the capital were excluded at the last minute because of the upsurge in contamination. The opposition is calling for a special session of parliament on how to deal with the epidemic.

You have 43.88% of this article to read. The rest is for subscribers only.

Zulemita Menem: “Pray for my dad”

Ellen Page came out as transgender and changed her name /...

the first thing you see marks your personality / Argentina News

China denies it is spreading disinformation about the virus after EU...

Sharp drop in property sales in the City of Buenos Aires ...